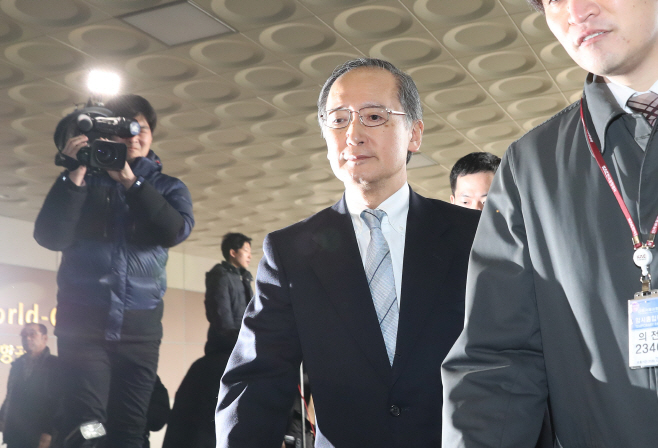 TOKYO/SEOUL, Apr. 5 (Korea Bizwire) — Tokyo’s top envoy to South Korea returned to Seoul Tuesday, nearly three months after he was called in home due to diplomatic friction over a girl statue symbolizing the victims of Japan’s wartime sexual slavery of Korean women.

The Japanese government recalled Amb. Yasumasa Nagamine in January in protest over the statue that civic groups erected in front of its consulate in the southern port city of Busan.

The Japanese ambassador arrived at Gimpo International Airport shortly before 10 p.m. Japanese Consul General in Busan Yasuhiro Morimoto, who was also recalled over the dispute, came back hours earlier.

“As instructed by Prime Minister Abe and Foreign Minister Kishida, I will push to meet Acting President Hwang Kyo-ahn and other key government officials here to make a strong demand for enforcement of the deal (on the comfort women issue),” he told a group of reporters upon arriving at the airport.

He also emphasized the importance of cooperation between the two neighbors particularly in dealing with the growing threat from North Korea’s nuclear and missile programs.

Tokyo claims that the statue built before its consulate, along with another one standing in front of its embassy in Seoul, runs counter to the landmark deal reached between the two countries in late 2015 to resolve the long-running rift over Japan’s atrocity of forcing Korean women into front-line brothels during World War II.

Under the deal on Dec. 28, 2015, Tokyo apologized and agreed to provide 1 billion yen (US$8.9 million) for the creation of a foundation aimed at helping the victims, euphemistically called comfort women. They also agreed to resolve the rift over the wartime atrocity “once and for all.”

Before flying back to Seoul, Nagamine met Prime Minister Shinzo Abe, who instructed him to request that Seoul fully implement the 2015 deal.

NHK quoted Nagamine as saying during the meeting, “I will make the utmost efforts to fulfill the present task,” indicating he will try to ensure the current and next South Korean governments carry out the obligations under the deal struck on Dec. 28, 2015, and get the statue removed.

Asked about how he will demand Seoul implement the deal, Nagamine said he plans a meeting with South Korean Prime Minister and Acting President Hwang Kyo-ahn to discuss the issue.

Nagamine said prior to his meeting with Abe he paid a courtesy call on Japanese Chief Cabinet Secretary Yoshihide Suga, who also instructed him to make every effort to demand the next South Korean government inherit the 2015 deal.

The next South Korean government that is set to be launched next month should observe the deal, Suga told a press conference earlier in the day.

South Korea is to hold a presidential election on May 9 following the impeachment of former President Park Geun-hye. Major presidential candidates have hinted at renegotiating or scrapping the deal.

Critics in Seoul demand the cancellation of the accord, saying that the Japanese government still refuses to recognize its legal responsibility and denies the women were forcefully recruited to front-line military brothels. The deal was also reached without consultation with the victims, they argue.

Historians estimate that up to 200,000 women, mostly from Korea, were forced to work in front-line brothels for Japanese troops during World War II. Around 40 surviving South Korean victims are mostly in their late 80s.

On Monday, Japanese Foreign Minister Fumio Kishida said at a press meeting in Tokyo that the decision to send the ambassador back to Seoul was made to more effectively cope with the political situation in South Korea and also demand faithful implementation of what was agreed upon in the comfort women deal.

Speaking to reporters in Seoul, Nagamine said that he will do his best as ambassador in dealing with such issues while keeping a close eye on any political developments related to the upcoming presidential election.

South Korea’s foreign ministry earlier reiterated its position that it will “faithfully” carry out what was agreed upon between the two countries and that it is important for all parties involved to respect the spirit of the deal.

With regard to the statue, however, the ministry didn’t elaborate, only to say that it will communicate with Japan on the issue.

“(On the Busan statue) We have repeatedly made our stance known. In that context, we plan to discuss with Japan going forward,” Cho June-hyuck, foreign ministry spokesman, told a regular press briefing in Seoul. “What is important here is that all relevant parties should respect the spirit and objective of the deal.”

The ministry previously said that it is not desirable to install such a statue in front of a diplomatic mission in view of safety and international courtesy and asked those involved to gather wisdom and find a better place for it.

The spokesman added that there was no prior consultation between the two countries regarding Nagamine’s return to Seoul and that the envoy’s meetings with foreign ministry and other government officials here will be discussed and decided by “our government” when he makes an official request.