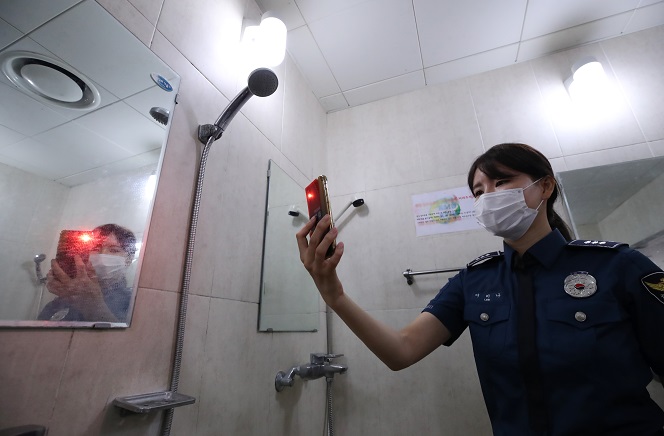 The police held demonstration on June 19, 2020 to detect illegal cameras hidden in a shower booth at Kookmin University’s Welfare Center by using a simple check card and a mobile phone. (Yonhap)

Hidden camera lenses can be detected simply by attaching the simple check card made of red cellophane paper to the rear camera of a cellphone and shining the light in video or flashlight mode onto the areas where hidden cameras are suspected to be hidden.

The Seongbuk Police Station plans to offer these simple check cards at public areas such as toilets, dressing rooms, and shower booths at universities, hospitals, subway stations, and shopping malls over a three-month trial period.

The simple check card is made of a red cellophane paper measuring a width of 5.4 centimeters and a length of 8.6 centimeters.

The red cellophane paper enables the user to find if the flash light of a mobile phone is reflected by the lens of the hidden camera.

Law enforcement officials said that the simple check cards work in the same way as the sensing of infrared rays. The price of the specially-designed red cellophane paper is about 2,000 won (US$1.65).

Officials from Seongbuk Police Station said that the red cellophane paper is cheap but effective enough to detect most hidden cameras available in the market.