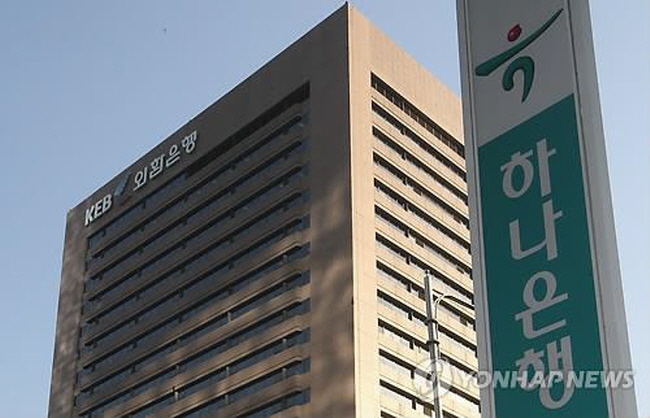 Hana Financial has tried to merge Hana Bank and the Korea Exchange Bank (KEB) since it acquired the KEB from U.S. buyout fund Lone Star in 2012. (image: Yonhap)

Hana Financial has tried to merge Hana Bank and the Korea Exchange Bank (KEB) since it acquired the KEB from U.S. buyout fund Lone Star in 2012. Its efforts have dragged on for years as the KEB had strongly opposed the merger until recently, citing its earlier promise to remain independent.

It filed a request before the Financial Services Commission (FSC) last week to seek preliminary permission for the merger, immediately after reaching an agreement with the KEB union.

“Given the current circumstances, the Hana-KEB issue will be discussed at the regular FSC meeting slated for Wednesday,” said an FSC official who asked not to be named. “It is highly likely that the case will be accepted by the FSC meeting.”

Market watchers also noted that the FSC, which has stressed that the labor-management agreement is a prerequisite for the integration, is fully supportive of Hana Financial’s move to give preliminary approval on Wednesday.

“The FSC checks only legal requirements for the preliminary review. We had already examined the case in January. It’s not difficult to do it again,” said the FSC official.

Hana Financial had submitted a petition in the beginning of this year, but soon withdrew it as a Seoul court upheld the KEB union’s demand to stop the merger process.

As soon as it receives permission from the FSC, Hana Financial will convene a shareholders’ meeting to decide the name of the integrated bank and seek official approval for the merger.

The company expects the new Hana-KEB bank to be launched as early as September.’