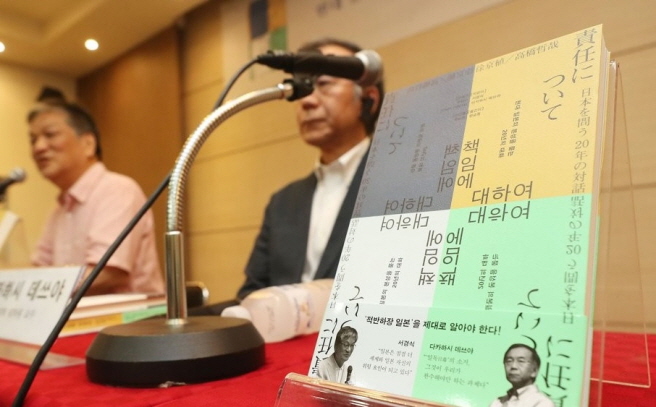 The cover of a new book by professors Suh Kyung-sik (L) and Tetsuya Takahashi on display during a press conference on Aug. 12, 2019. (Yonhap)

SEOUL, Aug. 12 (Korea Bizwire) — Under international law, Japan is still liable for compensating Koreans forced to work for Japanese firms and in military brothels during World War II despite a 1965 bilateral treaty that Japan claims has settled such compensation claims, a Japanese scholar said Monday.

Tetsuya Takahashi, a philosophy professor at the University of Tokyo, co-authored “On Responsibility,” a 2018 Japanese book that traces Japan’s stubborn evasion of its colonial-era liabilities to the country’s feeble democratic foundation through an in-depth discourse with Suh Kyung-sik, a law professor at Tokyo Keizai University and a Korean national born in Japan.

During a press conference in Seoul to mark the release of the book’s Korean translation, the Japanese professor said the treaty does not exempt Japan from its liabilities for individual victims.

Translated by Han Sung-dong, a former left-wing journalist in South Korea, the Korean book arrived as South Korea-Japan relations tumbled to one of the worst points in postwar history.

Tokyo has claimed that all reparation issues stemming from its colonization of Korea were settled under the treaty, which involved a large amount of compensation paid to the South Korean government.

But Seoul believes that the treaty does not cover issues directly linked to the illicit nature of Japan’s colonial occupation.

“From the perspective of international law, the global trend is that individuals’ rights and dignity should be respected in cases like the South Korea-Japan treaty and their individual claims are not offset by any inter-government treaties,” Takahashi said.

“Japan’s latest claim runs against such a global trend.”

He said Japan needs to go back to the year 1965 and start over to acknowledge the illegality of its colonial control of Korea through the lens of international human rights law.

The two scholars are on the same page in pinning the cause of the long-running Korea-Japan rows on the true nature of Japanese democracy today — imperialism and totalitarianism masked behind a facade of democracy.

The book refers to the issue of Korean women sexually enslaved by the imperial Japanese army, as well as two internal Japanese issues — American troops stationed Okinawa and the 2011 Fukushima Daiichi nuclear disaster — as it makes a case for Japan’s deep-rooted colonialistic inclination to brush aside and exploit minorities and victims.

Suh said new South Korea-Japan relations should start from Japan’s resolution of its colonial past.

“Without it, phenomena like today’s (compensation row) will continue to repeat,” he said.