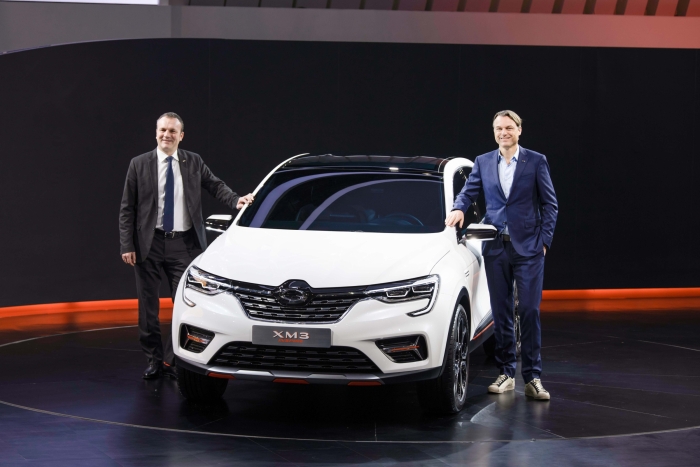 The XM3 SUV to be launched in South Korea in the first quarter of 2020. (image: Renault Samsung Motors)

Renault Samsung aims to sell over 100,000 vehicles in 2020 by launching three all-new models and three upgraded ones throughout 2020, the company said in a statement.

The three all-new models are the XM3 compact sport utility vehicle, the second-generation QM3 SUV and the ZOE pure electric car, and the three others are the upgraded versions of the SM6 sedan, QM6 SUV and Master van, it said.

The XM3 SUV is set to be launched in the first quarter, followed by the QM3 SUV and the ZOE compact all-electric car due out during the first half and the others later next year.

Last month, Renault Samsung reduced production at its sole plant in Busan, 454 kilometers south of Seoul, due to declining sales and a lack of a new vehicle for exports.

It also offered a voluntary retirement program, the first since 2012, to its 1,800 employees in September, but only a few dozen workers applied for the program.

The company has said it will be difficult to maintain the current workforce as the output volume of Nissan Motor Co.’s Rogue SUV is expected to fall sharply next year from this year’s 60,000 units.

But Nissan cut its output allocation to the plant to 60,000 from 100,000 early this year due to production losses caused by the union’s strikes.

But the company is still in talks with its parent Renault, and no decision has been made yet.