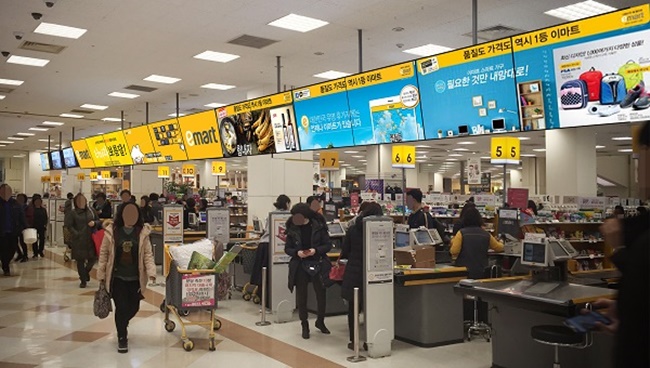 The study conducted by supermarket giant E-Mart showed that the number of customers peaked when the temperature hit minus 5 degrees Celsius, also known as the ‘golden temperature’ in the South Korean retail industry. (Image: E-Mart)

SEOUL, Feb. 21 (Korea Bizwire) — A new study has revealed that retail sales in South Korea during the winter increase when the weather is chilly, but not too cold.

The study conducted by supermarket giant E-Mart showed that the number of customers peaked when the temperature hit minus 5 degrees Celsius, also known as the ‘golden temperature’ in the South Korean retail industry.

Researchers learned that customers were most likely to come out and shop when the mercury fluctuated around the golden temperature, after analyzing the shopping patterns of consumers from last December to early January on Wednesday, Thursdays and Fridays.

The number of visitors to E-Mart reached the highest levels between the 20th and 22th of December last year, totaling 2.17 million shoppers. During this period, the temperature dropped to around minus 5 degrees Celsius.

Between January 31 and February 2, 2.12 million people shopped at E-Mart stores across the country, with the temperature plunging to a low of minus 4.3 degrees Celsius on average.

During the seven weeks when the study was conducted, the temperature stayed at a low of minus 4 to minus 7 degrees Celsius on the top four most visited days.

The best temperature for retail sales didn’t come often, however.

The number of customers dropped when the mercury rose to minus 0.3 degrees Celsius, with only 2.05 million people visiting E-Mart stores on Wednesday, Thursday and Friday during the third week of January.

When it was too cold, retail sales were impacted negatively, with the number of customers plunging below 2 million during some days in January when the temperature dropped to minus 10 degrees Celsius.

“When cold waves hit and temperatures drop below minus 10 degrees Celsius in the winter, shoppers tend to avoid offline shopping. At the same time, warm weather also doesn’t help retail sales as sales of seasonal products like heating supplies become sluggish. We believe around minus 5 degrees Celsius is best for retail sales,” an E-Mart official said.