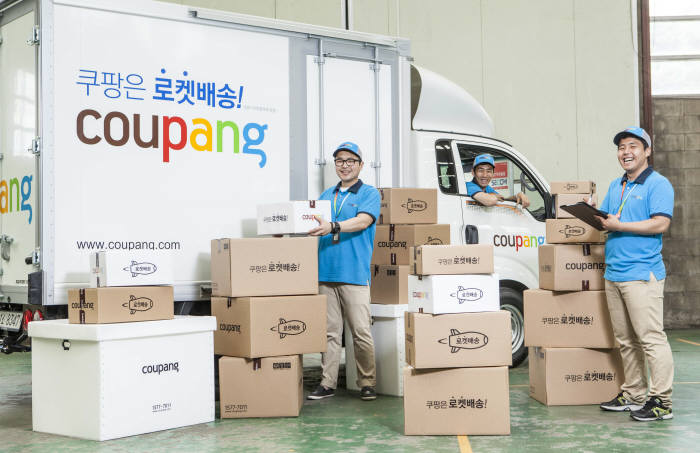 The battle for fast-delivery of items is heating up among e-commerce operators and retailers after Coupang launched a “rocket delivery” service in 2014, joining the global wave of ultra-fast delivery competition. (image: Coupang)

SEOUL, Oct. 5 (Korea Bizwire) — Shopping at large discount stores has become a less preferred chore for Lee Na-young after the troubling experiences of pulling a cart through crowds and standing in long checkout lines with her two babies crying.

When Lee ran out of diapers and wet issues during a busy week, she tried Coupang’s “rocket delivery” service with her smartphone. Click, click and within hours, a parcel was delivered right to her door. She became addicted to the new convenience and later expanded the shopping list to include rice, water and ramen.

“I didn’t prefer online shopping for daily necessities because of shipping fees and time needed for the delivery. But if I can buy products at cheaper prices and receive them within the same day, why not try it?” the 33-year-old housewife in Seoul said.

Lee is one of many consumers who are changing their shopping habits to take advantage of wider options that deliver items on the same day, even within a few hours.

While online shopping was not considered a viable option for occasions when time is of the essence, more retailers are poised to fill this void and once again revolutionize e-commerce by changing consumer expectations.

Coupang is largely responsible for the ultra-fast delivery battle after launching its “rocket delivery” service by hiring its own couriers called “Coupangmen” in March 2014, joining the latest global trend led by online retail behemoth Amazon.’

Buoyed by positive feedback and PR buzz, the five-year-old e-commerce operator’s mobile payment transactions more than doubled to 1.4 trillion won (US$1.3 billion) last year. After drawing US$1 billion in investment from Japanese telecommunications giant SoftBank Corp in June, Coupang is set to expand its delivery system and logistics centers across the nation.

To survive, other online retailers are seeking ways to use every available resource to grab customers with fast shipping.

WeMakePrice, the No. 2 e-commerce retailer, has launched a same-day delivery system that compensates for late arrival with points consumers can use for later purchases. If products arrive 7 days after the purchase, it promised to give a refund, plus 3,000 points.

In July, eBay Korea, which operates the nation’s largest open market sites, Gmarket and Auction, joined hands with Homeplus, the No. 2 discount store chain, to provide daily necessities and fresh food within the same day.

Large discount stores are also transforming their delivery and logistics system as more consumers are combining both online and in-store experiences to shop.

E-Mart, a leading discount chain operated by retail giant Shinsegae, saw faster sales growth from online and mobile channels after expanding its home delivery service that fetch products at a designated time for free for purchases over 30,000 won. It plans to expand logistics centers for online shopping malls.

Besides the same-day delivery option, its smaller rival Homeplus began on-demand quick service in which couriers deliver products for additional fees during daytime in Gangnam, an affluent Seoul region.

The delivery war has heated up in recent years as traditional retailers are trying to grab a bigger chunk of market share after suffering a double whammy of fast-growing online retailers and the weak household spending in Asia’s fourth-largest economy.

According to the Korea Online Shopping Association, online shopping malls replaced hypermarkets to become the dominant retail force last year, and online shopping is expected to account for 30 percent of the domestic retail market by 2020.

“Korea has the right mix of socio-economic conditions that favor growth of on-line retail business, in particular high population density and high affinity toward new information technologies,” the Global Agriculture Information Network said in a report.

The biggest beneficiaries from the speed race are likely to be the logistics and warehousing sectors.

Market observers say major parcel service operators, equipped with the latest technology to allow shoppers to track purchases in real-time, will be able to raise more revenue from the explosive growth in digital shopping.

“Both online and offline retailers have taken the same-delivery shipping seriously and have expanded their logistics capacity to meet growing demands from the online shopping,” said Kang Dong-jin, an analyst at HMC Investment &amp; Securities. “Offline retailers’ bid to bolster online business will help boost earnings of logistics companies.”

But the question is: Is this a sustainable business model or a PR ploy to attract consumer’s attention while only having to minimally deliver on this option down the road?

In case of Coupang, its 2014 sales jumped more than seven-fold on-year to 348.5 billion won, but a sizable spending increase in logistics widened its operating loss to 121.5 billion won, casting doubt over its long-term business outlook.

Despite some initial losses from big investments, experts say, fast delivery will become a “new normal” in South Korea considering its metropolitan-centered population and the advanced transportation and IT infrastructure.

“Once customers get accustomed to fast delivery, they lose patience for the regular delivery schedules. It means that customers will just move onto the next channel when their demands are not met,” Lee said. “The hare will have more orders, while the tortoise will be out of the market. That’s the nature of the business.”