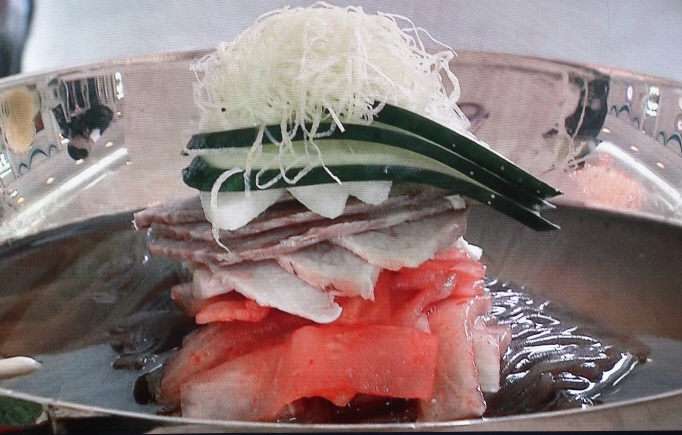 Ri Sol-ju, the wife of leader Kim Jong-un, said that Pyongyang naengmyeon had become even more famous after the first summit in April. (image: Yonhap)

The dish garnered significant media attention at the previous summit at Panmunjom in April, when North Korean officials brought a noodle making machine with them.

Yesterday, President Moon Jae-in and his wife, First Lady Kim Jung-sook, headed to Okryu-gwan, one of the top restaurants in Pyongyang, alongside North Korean leader Kim Jong-un, to enjoy the cold noodle delicacy for lunch.

Aside from the head table seating the South and North Korean leaders and their wives, other tables at the restaurant had South and North officials seated mixed amongst themselves.

When the two heads of state entered the restaurant at 12:42 p.m., 42 minutes behind schedule, South and North Korean officials stood up to greet the leaders with applause.

Those sitting at the head table started a conversation about the star of the meal, a dish named after the city hosting the talks.

Ri Sol-ju, the wife of leader Kim Jong-un, said that Pyongyang naengmyeon had become even more famous after the first summit in April.

In response, President Moon said that he preferred the noodles served on a plate, a dish that is similar to “bibim naengmyeon” enjoyed in South Korea, served at the previous summit that took place in Panmunjom.

Other guests at the lunch seemed to enjoy the Pyongyang rendition of the cold noodles.

Professor Yoo Hong-jun of Myongji University, who was seated on the left of Ri, said that due to the “naengmyeon boom” that followed the previous summit, famous naengmyeon restaurants in Seoul saw lines that could require over an hour of waiting.

South Korean rapper Zico said, “This is totally different from the other Pyongyang naengmyeon I have had in my life.”

Former coach of the national football team Cha Bum-kun said he could taste a deep flavor in the cold noodle dish and would relay the sentiment to his wife back home.

Meanwhile, President Moon and his entourage enjoyed a serene photo session with the Taedong River as a backdrop after the lunch.