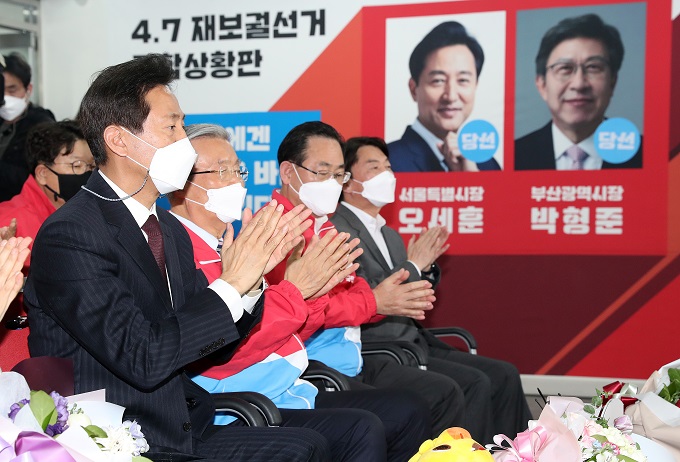 Oh Se-hoon (1st from L), the candidate of the main opposition People Power Party, claps to express joy at the party’s headquarters in Seoul on April 8, 2021, as he looks set to win the Seoul mayoral seat in a by-election the previous day over Park Young-sun of the ruling Democratic Party. (Yonhap)

Oh Se-hoon of the main opposition People Power Party (PPP) defeated his rival from the DP, Park Young-sun, 57.5 percent to 39 percent to claim the Seoul mayoral seat, according to the final vote tally released by the National Election Commission.

The PPP also swept 13 of 19 other local posts up for grabs in the elections.

The polls, especially in Seoul, home to nearly 10 million of the country’s 52 million population, are seen as harbingers of public opinions ahead of the presidential election set for March 2022.

President Moon Jae-in and his ruling party have been grappling with public outrage and falling support over spiking housing prices and a scandal involving public housing development officials, which erupted a month before Election Day.

The DP’s recent railroading of progressive bills, including those on weakening the power of the state prosecution service, has also drawn heat.

The DP has also been under criticism as the two mayoral by-elections were called after the previous mayors — Park Won-soon in Seoul and Oh Keo-don in Busan, both affiliated with the liberal party — left the posts last year amid sexual harassment allegations.

As the election results clearly tilted toward the PPP early on, the DP and its two mayoral candidates quickly conceded defeat.

“(DP) humbly accepts the public sentiment displayed in the election results. We gave huge disappointment to the people due to our shortcomings,” the party’s acting chairman, Kim Tae-nyeon, said in a press release.

The DP’s floor leader and the Supreme Council members held a closed-door meeting and discussed resigning from their posts en masse but stopped short of a conclusion. 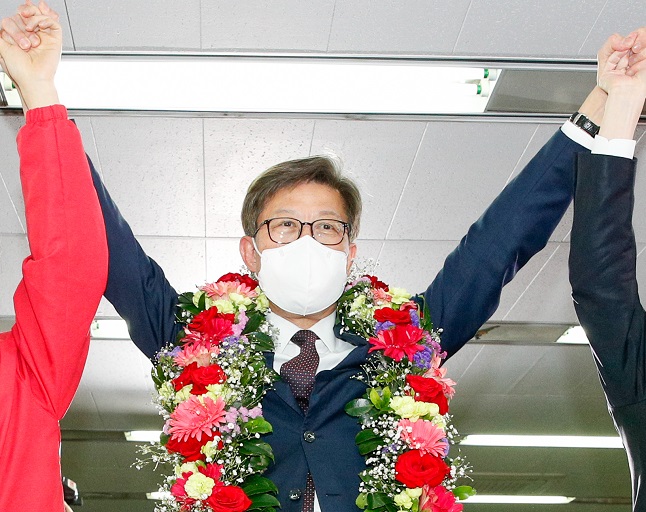 Park Heong-joon, the candidate of the main opposition People Power Party, celebrates at his election office in the southeastern port of Busan on April 7, 2021, after early returns showed he was certain to win the mayoral seat by a landslide. (Yonhap)

Oh, in what was a de facto victory speech, promised to look after the victim of alleged sexual harassment from the former Mayor Park and make sure she makes a smooth return to her job at the Seoul city hall.

Oh also said he felt a “heavy sense of responsibility and pledged to engage in his job with “a passionate heart.”

His victory will reinstate him to the mayoral seat of Seoul 10 years after he left the post at the midpoint of his second term, in protest against the opposition-dominated city council’s introduction of a free school lunch program for all students.

The new mayors of the two cities will serve out the remaining 14 months of the former mayors’ four-year terms.

The provisional voter turnouts for the Seoul and Busan elections came to 58.2 percent and 52.7 percent, respectively, surpassing the 50-percent level for the first time in by-elections that included races for heads of metropolitan governments.