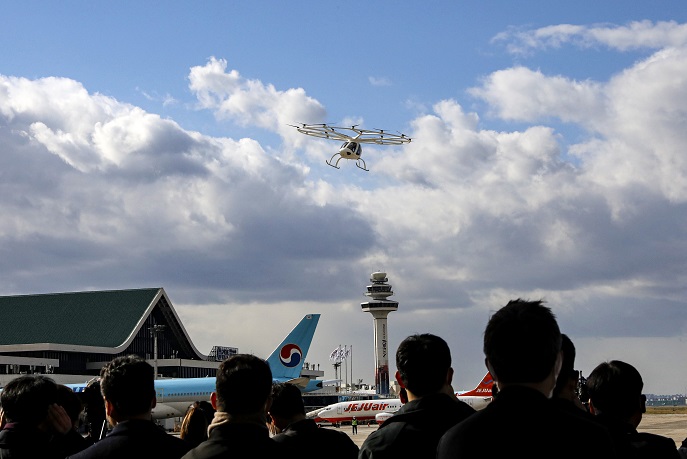 The two-seater multirotor aircraft took off vertically and flew to a designated air corridor before returning to the starting point at Gimpo International Airport in western Seoul. It flew about 3 kilometers at less than 50 meters high.

“We will make sure the envisioned projects are carried out without a hitch for the 2025 commercialization,” Transport Minister Noh Hyeong-ouk said at the demonstration event.

“We’ll establish systems and legal standards so that we can have world-class competitiveness.”

The test flight was designed to verify the operations at an airport environment in the country ahead of its planned commercialization in 2025, the Ministry of Land, Infrastructure and Transport said.

South Korea has set aside more than 77 billion won (US$65 million) to build a UAM ecosystem.

Its pilot model, reduced in size, also performed the test flight at the state flight testing station from Goheung, about 470 kilometers southwest of Seoul, which was livestreamed during the demonstration event in Gimpo.

KARI plans to have the lifesize OPPAV ready for a test flight next year.