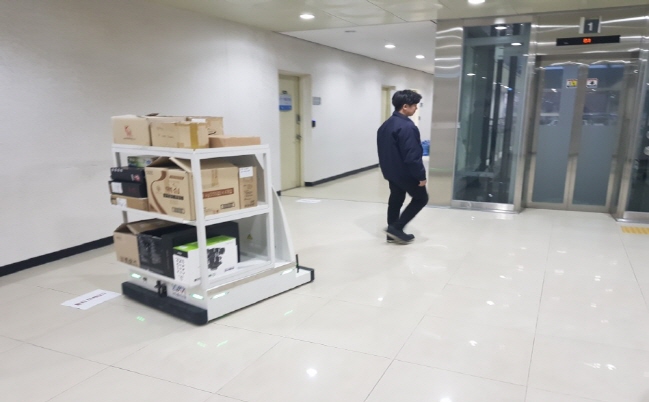 The Mobile Power Cart detects the physique of the user and follows them, carrying a maximum of 250 kilograms of cargo. (image: Ministry of Land, Infrastructure and Transport)

The Ministry of Land, Infrastructure and Transport announced on Thursday that it had developed a Mobile Power Cart and Smart Power Carrier following an extensive R&D project which began in 2014.

The Mobile Power Cart detects the physique of the user and follows them, carrying a maximum of 250 kilograms of cargo. A cutting-edge sensor is attached to the cart to detect materials with clear-cut precision.

Unlike other products that move along lines drawn on the floor, the Mobile Power Cart moves by identifying the physique of the user, which allows immediate use without additional installation procedures.

It is also capable of making 360˚ turns, helpful in maneuvering in smaller warehouses.

The new product comes with a competitive price. While similar products from overseas cost around 38 million won (US$33,800), the Mobile Power Cart only costs 15 million won (US$13,340).

The Smart Power Carrier is an electric vehicle that a driver can operate to carry a maximum of 200 kilograms of cargo.

A world’s first, the Smart Power Carrier can easily maneuver in narrow spaces and is suitable for carrying a variety of goods in small numbers. It can be used in factory storage rooms or wholesale markets.

The Smart Power Carrier costs only around 3.3 million won (US$2,930) It is already being used at Nonghyup Hanaro Mart for logistical support.

“The Mobile Power Cart and Smart Power Carrier can easily be remodeled or adjusted to fit various working conditions,” said a source from the Ministry of Land, Infrastructure and Transport.

“We will do our best to develop and supply new equipment to improve logistics environments.”