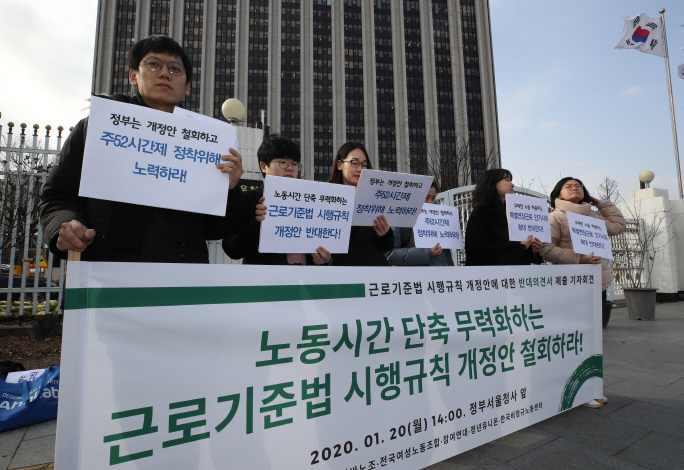 Labor activists rally against the eased rules on special extended work hours in front of the government complex in central Seoul on Jan. 20, 2020. (Yonhap)

The Ministry of Employment and Labor proclaimed the revised enforcement rule of the Labor Standards Act, which loosened the requirements for granting special extended work hours. The rule went into effect immediately.

The extended work hours system, which temporarily allows employees to work more than 52 hours per week during a certain period, was limited to emergency measures to cope with disasters and major accidents.

Under the revision, the scheme will be expanded to include such instances as safety emergencies, critical malfunctions, unusual surges of workload, and research and development projects crucial to national competitiveness.

It requires the consent of the employees concerned and approval from the labor ministry.

The revision was made in response to business complaints about the difficulty of responding to extraordinary situations that need intensive labor because of the 52-hour workweek, which came into force in July 2018.

But labor unions were opposed out of concern that companies would take advantage of possible loopholes to unduly lengthen work hours.

To prevent abuses, the ministry distributed guidelines that elucidate instances that the new rule applies to, including a massive automobile recall, possible decomposition of raw materials and R&D projects for high-tech parts and materials, for example.

The ministry also emphasized the relaxation is only a stop-gap measure until a proposed bill on the expansion of working-hour flexibility is implemented.

The bill, pending at the National Assembly, aims to give employers greater leeway in operating the 52-hour workweek.

It seeks to expand the application period of the flexible work hour system, which allows companies to readjust working hours in a lump-sum manner, from the current three months to six months.