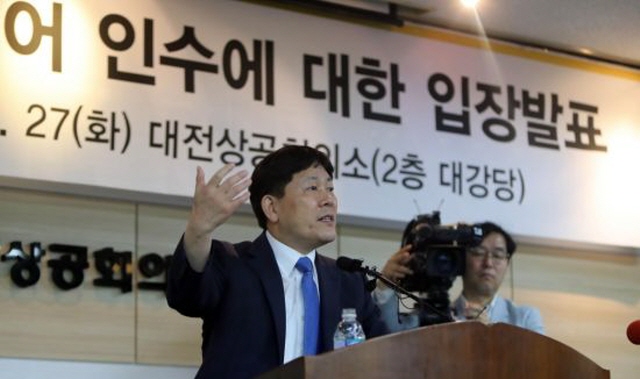 At a press conference in Daejeon, about 160 kilometers south of Seoul, the company’s chief Kim Jeong-kyu said the company “has decided to push for the takeover of Kumho Tire as it cannot sit by and do nothing as the tiremaker is pushed toward a Chinese company.”

Tirebank is the “right company” that can help put Kumho Tire back on track as the company can boost sales through its nationwide tire sales network, the chairman said.

After listening to creditors, Kumho Tire’s union and public opinion, Tirebank will make a final decision on the acquisition, he said.

Kumho Tire’s union immediately welcomed Tirebank’s offer to acquire the financially troubled tiremaker as union workers believe an acquisition by a Korean company will guarantee job security and prevent the taking of technologies.

In a regulatory filing with the Financial Supervisory Service, however, Kumho Tire said it has not received any takeover bid from domestic companies that include Tirebank.

Kumho Tire’s main creditor, Korea Development Bank, now seeks to sell the tiremaker to Doublestar, but the union has been resistant to the decision due mainly to concerns of massive job cuts after the acquisition.

The KDB said Kumho Tire will be placed under court receivership if the union fails to accept Doublestar’s investment proposals by the end of March.