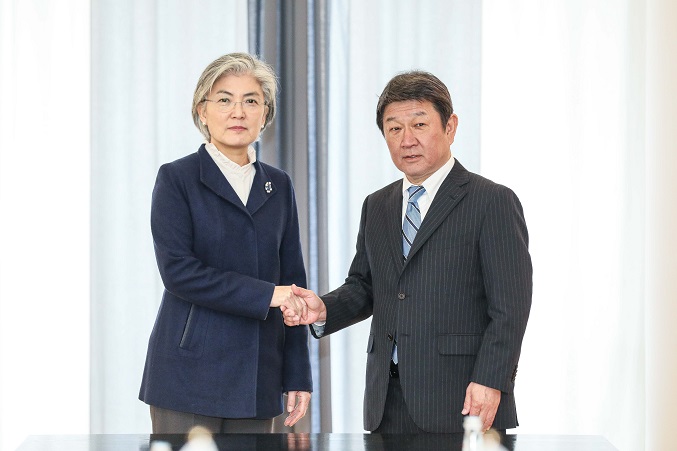 Foreign Minister Kang Kyung-wha (L) shakes hands with her Japanese counterpart, Toshimitsu Motegi, before their talks on the sidelines of an international security forum in Munich, Germany, on Feb. 15, 2020, in this photo provided by Kang’s office.

Last month, Seoul and Tokyo kicked off diplomatic talks on the relaxation of the restrictions based on the shared view that the countries should allow the entry of businesspeople as long as they do not undermine the fight against the COVID-19 pandemic.

“The talks are currently at the early phase in which the countries have basically been checking related facts — a process that could take some time,” the source told Yonhap News Agency on condition of anonymity.

In March, the two countries imposed entry restrictions against each other, worsening ties already strained over wartime history and trade. Tokyo first announced its restrictions for Korean travelers, which prompted Seoul to roll out its own in a tit-for-tat move.

Seoul and Tokyo have been holding consultations on the entry restrictions largely through online communication channels.

Observers said that the countries might first focus on easing restrictions for business travelers and then could consider whether to relax the strictures against students and tourists.

During phone talks in June, Foreign Minister Kang Kyung-wha proposed to her Japanese counterpart, Toshimitsu Motegi, the relaxation of entry restrictions for businesspeople.