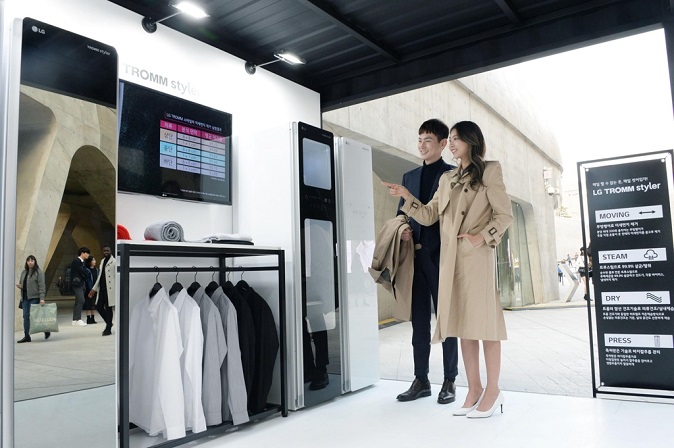 Models pose at LG Electronics Inc.’s booth featuring the Styler clothing-care appliances at the Seoul Fashion Week in this photo provided by the company on Oct. 16, 2018.

The number of patent applications related to clothing care systems in five major markets — South Korea, the U.S., China, Europe and Japan — recorded an average annual growth of 27 percent over the past nine years, according to the Korea Intellectual Property Office.

The number of such patent applications filed in the five markets totaled 786 during the period, of which South Korea ranked No. 1 with 642 applications or 82 percent of the total, followed by China with 69, Europe with 46, the U.S. with 26 and Japan with 3.

By company, LG Electronics Inc. topped the list, with 136 patents filed for the internal and external structure of clothing care systems, 123 patents for clothes hanging tools such as moving hangers that eliminate bacteria by vibrating and pant presses that can create pant creases, and 101 patents related to steam supply technology.

Following LG were Samsung Electronics Co., which filed for 41 patents related to steam supply technology that eliminates dust and wrinkles using strong wind rather than vibrations, and Coway Co. with eight patent applications, including the most for indoor dehumidification purification technologies.