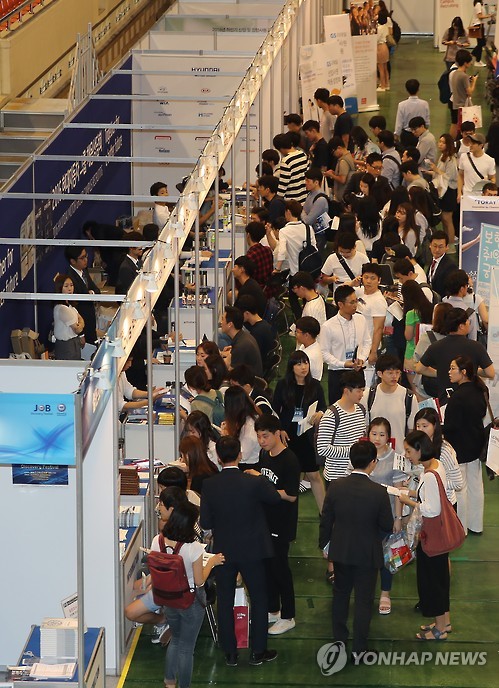 SEOUL, Oct. 24 (Korea Bizwire) – One out of every two college students believe job market conditions have worsened this year, while more than half of would-be jobseekers said they wanted to work for a large firm or a public enterprise, a survey showed Monday.

In the survey conducted by the Federation of Korean Industries (FKI), 52.6 percent of 3,461 students surveyed said job market conditions have deteriorated from a year earlier for fresh college graduates.

Only 2.6 percent answered that conditions have rather improved, while 26.5 percent said they did not see any significant changes.

The outcome of the survey was apparently in line with actual market conditions.

The unemployment rate of people aged between 15 and 29 years has remained at around 10 percent over the first nine months of the year, after peaking at a record high of 12.5 percent in February. The youth unemployment rate came to 9.4 percent in September, compared with the 3.6 percent jobless rate for the entire population.

The FKI did not provide reasons for such a high unemployment rate, but its survey showed more than half of those surveyed wished to work for either a large conglomerate or a public firm.

Only 5.3 percent of those surveyed said they planned to look for a job at a small or medium-sized company, possibly explaining the high jobless rate of the young in the country where small and medium-sized firms account for nearly 98 percent of total employment.

Apparently acknowledging the discrepancy between what they want and what is available, 15.4 percent of respondents said they will probably end up finding a job at a smaller company.

The FKI, the largest business lobby in South Korea that represents the country 600 largest firms, also suggested that many college students may have too high expectations in terms of wage.

Those surveyed said they wished to make an average 34.64 million won (US$30,514) in the first year out of college.

The FKI said the amount would make place them among the top 32 percent of all income earners.

“The students cited a need to narrow the wage gap between large firms and smaller companies, as well as efforts to create new jobs to help reduce youth unemployment rate. This will require companies to voluntarily narrow the income gap between large and small firms, while the government must step up its efforts to create more quality jobs,” the FKI said in a press release.