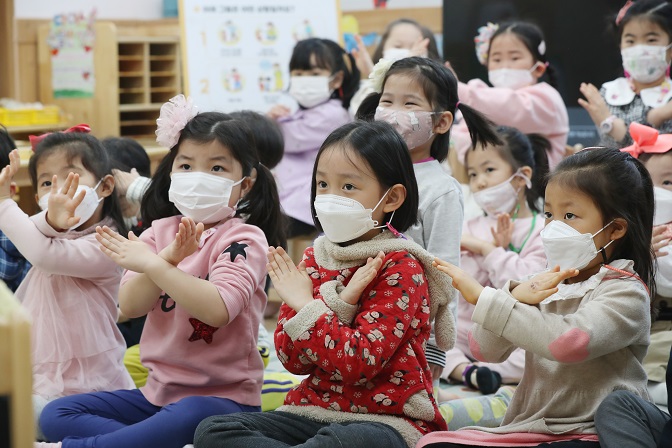 Children wearing masks participate in an activity at a day care center in Gwangju, 330 kilometers south of Seoul, on March 10, 2021. (Yonhap)

SEOUL, Aug. 11 (Korea Bizwire) — Ex-spouses failing to make child support payments to their divorced partners may have a travel ban imposed against them if payments are more than 30 million won (US$23,020) in arrears, down from 50 million won in the past.

The Cabinet recently approved an amendment for the enforcement decree on child support payments.

The Ministry of Gender and Equality said it expects a rising number of requests to ban ex-spouses from leaving the country once the enforcement degree takes effect next Tuesday.

In regards to 49 ex-spouses who failed to make child support payments, the Ministry of Gender and Equality asked the Ministry of Justice and the National Police Agency to ban 17 of them from leaving the country and suspend driver’s licenses for 30 of them.

The gender ministry also revealed the names of two people.

Penal measures against ex-spouses failing to make child support payments were introduced in July last year, after which the number of people subject to the penalties rose from 27 people last year to 151 people this year.