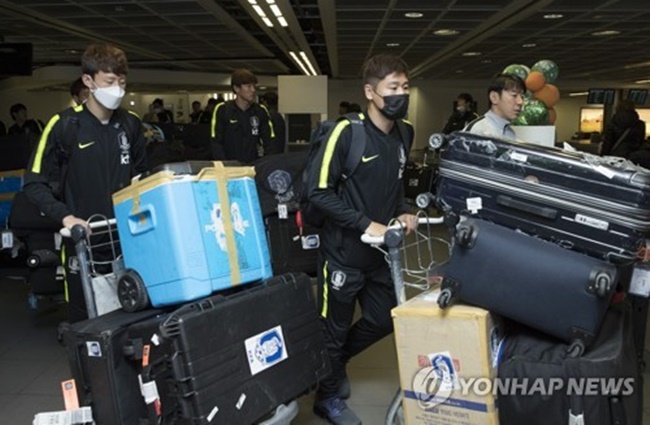 SEOUL, March 20 (Korea Bizwire) – South Korea’s national football team is set to train with a full squad in Dublin for European friendly matches later this month, as overseas-based players joined the team for their international duty.

South Korea, led by head coach Shin Tae-yong, called up 23 players for their friendly matches against Northern Ireland and Poland later this month on the road. Shin’s side, 59th in the latest FIFA rankings, will take on No. 24 Northern Ireland at Windsor Park in Belfast on Saturday and face No. 6 Poland three days later at Slaski Stadium in Chorzow, Poland.

Fourteen players from domestic K League 1 clubs took a flight to arrive in Dublin on Monday (local time) for their training.

Koo Ja-cheol of FC Augsburg joined the team in Frankfurt, Germany, where the team made a stop to transfer for the flight to Ireland. Son Heung-min of Tottenham Hotspur, Ki Sung-yueng of Swansea City and Japan-based national players were already in Dublin before the national team arrived.’

The Korea Football Association (KFA) said Shin’s team will train at FAI National Training Centre in Dublin from Tuesday to Thursday before moving to Belfast, where South Korea will take on Northern Ireland.

Meanwhile, the KFA said two assistant coaches will not be with the national team since they’ll watch the matches of South Korea’s World Cup opponents. The Taeguk Warriors are in Group F at the 2018 FIFA World Cup, along with Germany, Sweden and Mexico.