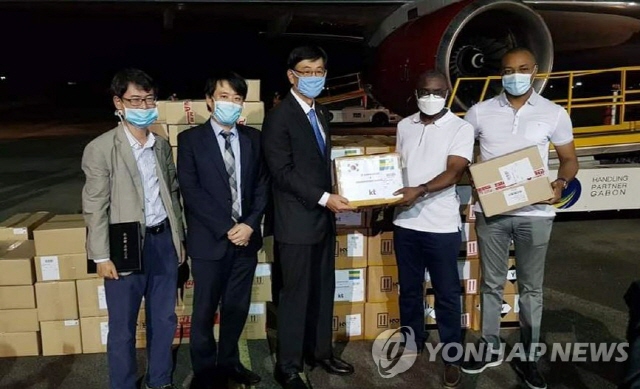 This photo, provided by the South Korean Embassy in Gabon, shows Gabonese government officials (1st and 2nd from R) posing for a photo upon the arrival of 50,000 coronavirus test kits from South Korea at Libreville International Airport in the Gabonese capital of Libreville on April 18, 2020.

The value of test kit exports stood at US$201.2 million last month, compared with $24 million in March, according to the data from the Korea Customs Service.

So far this year, South Korea has exported test kits to a total of 103 nations.

In the first four months of this year, South Korea exported $225 million worth of coronavirus test kits.

Brazil imported $30 million worth of test kits from South Korea, followed by Italy with $22 million and India with $21 million, the data showed.

South Korea has appeared to bring the virus outbreak under control, with daily new infections falling below five in recent days. South Korea has tested about 640,000 people.