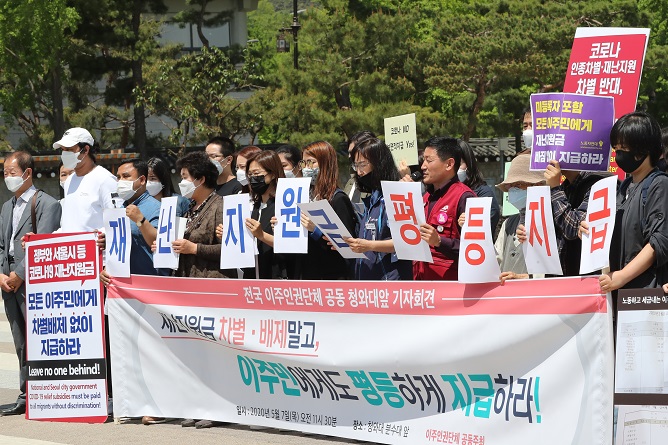 Civic groups for immigrants’ rights hold a press conference in front of National Human Rights Council of Korea building in downtown Seoul on May 7, 2020. (Yonhap)

Participants at the 10th World Human Rights Cities Forum, held at the Kim Dae-jung Convention Center in the southwestern city of Gwangju from Oct. 7-10, agreed that discrimination and hatred towards foreigners, sexual minorities, and religious groups became more distinct after the coronavirus outbreak.

The forum was held via a videoconference system amid the coronavirus pandemic.

As an example, they mentioned the Chinese and Chinese of Korean ethnicity living in Seoul’s Guro District who fell victim to various expressions of hatred shortly following the coronavirus outbreak, during which areas with concentrated numbers of Chinese residents were thought of as sources of the pandemic spread, which further expanded the sense of hatred.

A massive outbreak of infections among followers of the fringe religious sect Shincheonji in Daegu led to an outpouring of hate speech against the region, and movements to identify sect followers spread across the country.

Multiple infections at an Itaewon club in July forced numerous sexual minorities to reveal their sexual orientation. They also fell victim to false accusations that sexual minorities are ‘ethically distorted’.

“This discrimination is not new, but it has become more distinct and intensive following the coronavirus outbreak,” said Lee Wan, head of Solidarity for Asian Human Rights and Culture, adding that the state has officialized exclusive policies as it excluded immigrants and refugees from gaining access to the public supply of protective masks and disaster relief funds.

“The patterns of discrimination in the coronavirus era are mostly a distinct revelation of what has already existed underneath Korean society,” said Park Han-hee, South Korea’s first transgender attorney.

“They will continue to be a problem if we don’t address the issue of discrimination that is rampant in Korean society in general.”