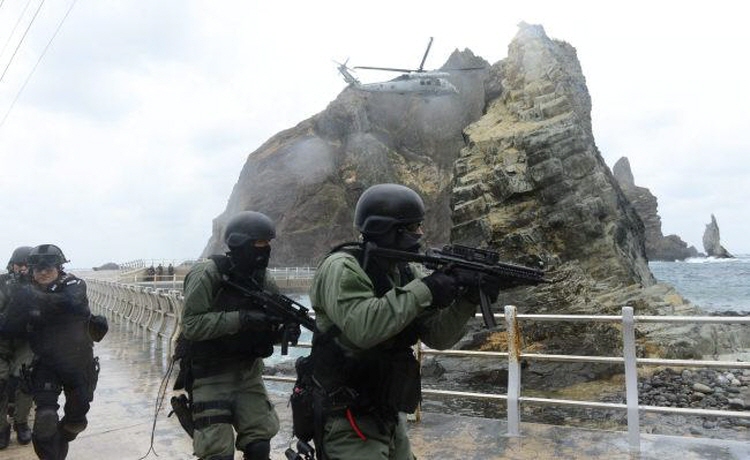 The exercise has been carried out twice a year since 1986, with the latest taking place in November last year despite protests from Japan. (image: ROK Navy)

SEOUL, May 15 (Korea Bizwire) — South Korea is conducting a military drill to defend its easternmost islets of Dokdo amid Japan’s renewed claims to the territory, military officers said Friday.

The Navy, jointly with the Coast Guard, “are carrying out the two-day drill from yesterday on and around the rocky outcroppings in the East Sea,” said a Navy officer, requesting anonymity. “It is designed to deter any trespassers on our territory via a sea or air route.”

The exercise has been carried out twice a year since 1986, with the latest taking place in November last year despite protests from Japan. Dokdo has been a perennial thorn between the two neighbors with Japan’s renewed claims to the islets stoking enmity in South Korea toward its former colonial ruler.

“The planned landing exercise by a squad of Marines was canceled due to bad weather conditions,” another military officer at Seoul’s Joint Chiefs of Staff (JCS) said, without further elaboration as the authorities decided not to make the drill public this time.

Earlier, officials said the exercise will also involve five to six destroyers, convoys, a Lynx antisubmarine helicopter, and some fighters and patrol planes.

South Korea says Japan’s territorial claims to Dokdo are tantamount to Japan’s denial of Korea’s independence from its 1910-45 colonial rule, as Seoul reclaimed sovereignty over all of its territories, including Dokdo and many other islands around the Korean Peninsula, upon its independence.