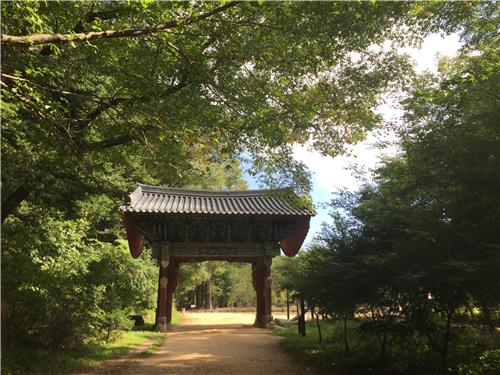 A trail through a forest at Woljeong Temple in PyeongChang, the host city of the 2018 Winter Olympics. (image: Yonhap)

PYEONGCHANG, Sept. 19 (Korea Bizwire) — When former International Olympic Committee (IOC) President Jacques Rogge announced PyeongChang as the host city of the 2018 Winter Olympics six years ago, the small alpine county was an unfamiliar name to almost all people living outside of South Korea.

Though already famous in the country for the outstanding natural vistas, historic landmarks and delicacies, the PyeongChang Organizing Committee said Tuesday that efforts are under way so foreigners can also have a memorable experience during the upcoming winter sports extravaganza.

The regional government is encouraging local restaurants to create English menus and the construction of a new high-speed KTX train line connecting the country’s west and east is nearing completion, according to officials on the committee.

The new railways will allow visitors to travel from Incheon International Airport, South Korea’s main gateway, to Gangneung in less than two hours. Gangneung is a sub-host city of the Olympics, where competitions will be held along with PyeongChang and Jeongseon.

One of the must-visit places in PyeongChang is Woljeong Temple, surrounded by Mount Odae.

The trail through a fir forest stretching from the entrance of the temple is especially popular after the famous Korean TV series “Guardian: The Lonely and Great God” was filmed at the location.

Alpensia Ski Jumping Center is another popular tourist destination in the town that became famous following the Korean sports movie “Take Off,” which cast light on the country’s national ski jumping team. It will be the actual stage for athletes during the Winter Games.

In Gangneung, Chodang Dubu (tofu) Village is where visitors can check out the city’s delicacy at dozens of restaurants specializing in tofu.

The name of the village, Chodang, originates from a famous family who is known to have once lived here. It is the pen name of Heo Yeop, father of novelist Heo Gyun and poet Heo Nan-seolheon of the Joseon Dynasty (1392-1910). 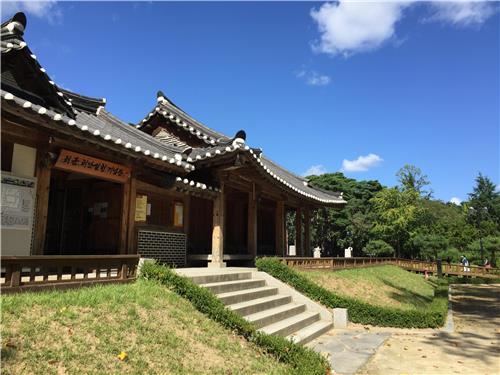 The memorial park for writers Heo Gyun and Heo Nan-seolheon of the Joseon Dynasty (1392-1910) in Gangneung, a sub-host city of the 2018 Winter Games. (image: Yonhap)

Their memorial park is located just 500 meters away from the village.

At the traditional-style Korean house reconstructed on the site that is presumed to be the birthplace of the writers, visitors can experience the country’s tea culture at the Traditional Tea Experience Center for just 1,000 won.

Gangneung is also well-known for cafes as it is the first local district in the country to have hosted a coffee festival.

At Gangneung Coffee Street located alongside Anmok Beach, visitors can easily find shops that roast their own coffee beans with the seascape unfolding before them.

The government has developed a mobile application Tour Gangwon to offer tourist information in multiple languages — Korean, English, Chinese and Japanese. It is available both in the Google Play Store and Apple’s App Store.

The organizing committee said its goal is to make PyeongChang an attractive city for visitors even after the Olympics.

“Japan’s Nagano and Norway’s Lillehammer are both cases where a lesser known city turned international after hosting the Olympics,” said Sung Baik-you, spokesman of the organizing committee. “We hope PyeongChang becomes Asia’s best tourist destination after the Winter Games.”