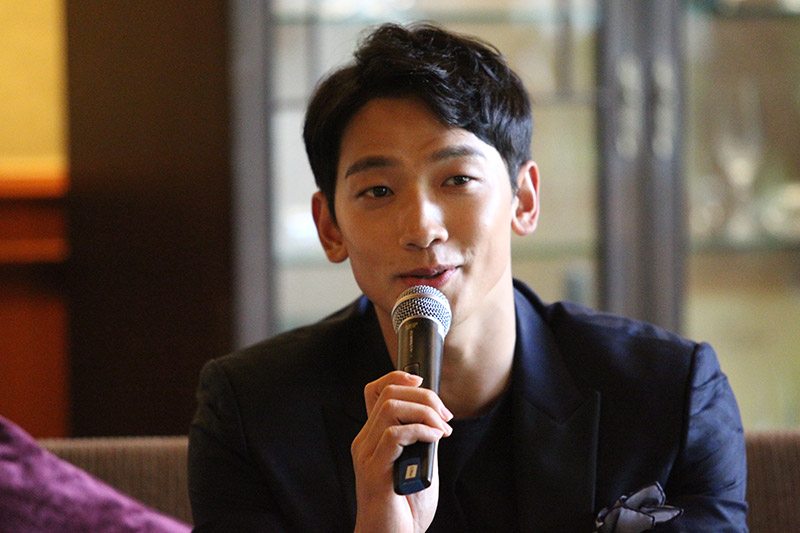 Rain speaks during an interview in Bangkok on June 4, 2017. He was in the Thai capital to take part in this year’s Viral Fest Asia, a two-day digital music festival. (image: Yonhap)

BANGKOK, Jun. 5 (Korea Bizwire) — South Korean singer Rain on Sunday expressed happiness about the pregnancy of his actress wife Kim Tae-hee, saying he has always yearned for a life with a family and he “could not be any happier now.”

Rain made the remarks during an interview in Bangkok after attending this year’s Viral Fest Asia, a digital music festival in the Thai capital. The two-day festival starting Friday brought the South Korean celebrity to the Southeast Asian country for the first time in two years.

It marked the first official interview that Rain has given since he and Kim got married in January.

“I am now leading a happy and pleasant life,” Rain said. “As you live, the yardstick for judging how happy you are can change. But at the moment now I’m ecstatic.”

The celebrity couple announced through Kim’s agency last month that they are expecting their first child and the 37-year-old actress is 15 weeks into her pregnancy.

Rain, whose real is name Jung Ji-hoon, is taking part in the making of the biographical drama film “Uhm Bok-dong,” which revolves around the famed cyclist Uhm Bok-dong who became a symbol of pride for Koreans when he defeated Japanese cyclists and won the championship in a bicycle race during the Japanese colonial period (1910-45).

Rain said the filming of the movie is about 40 percent done and he is expected to focus his activities on it until mid-August. “If I could star in another good drama, I expect my new album would come out in December. But if I could not, around mid-November,” he said.

During the interview, the 35-year-old singer also appeared to fret about being an old-timer as a dancing singer. “I have been developing a new kind of dancing that could show the depth of my experience and prowess in singing and dancing that younger singers will find hard to emulate,” he said.

“I think only after making aggressive approaches at least one or two times will I consider exiting the singing and dancing field.”

Rain and Kim first met on a TV commercial set in 2011 and officially started dating in the fall of 2012.