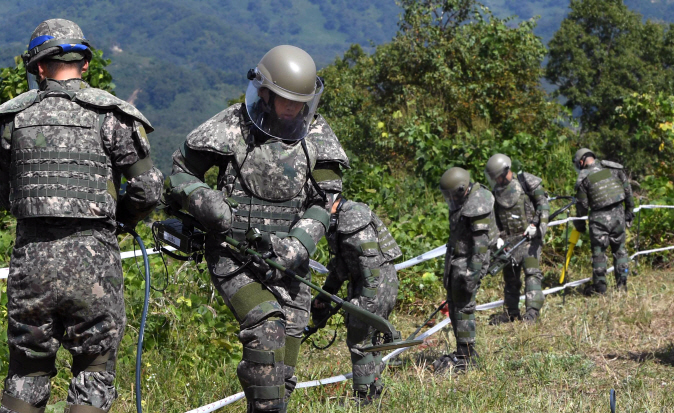 SEOUL, Apr. 1 (Korea Bizwire) — South Korea launched an independent excavation of Korean War remains in the Demilitarized Zone (DMZ) on Monday, with Pyongyang unresponsive to its call to work together as agreed, Seoul’s defense ministry said.

Under last year’s bilateral military accord aimed at reducing tensions and building trust, Seoul and Pyongyang had planned to carry out the joint project on Arrowhead Ridge, a notorious battle site during the 1950-53 conflict, from April through October.

But the North has yet to accede to Seoul’s request to jointly start the excavation. It has appeared lukewarm about the military accord since the no-deal summit between U.S. President Donald Trump and its leader, Kim Jong-un, in Hanoi in late February.

“From today onward, our military will conduct additional mine clearance operations and basic excavation work south of the Military Demarcation Line in preparation for the inter-Korean excavation,” Col. Roh Jae-cheon, the ministry’s deputy spokesman, told a regular press briefing.

“We are making preparations to ensure that we are ready for transition to a joint excavation process immediately when the North accedes (to our request),” he added.

The South deployed 100 personnel for the excavation, along with additional demining operations to ensure the safety of the retrieval process.

It is part of the Comprehensive Military Agreement (CMA) that the two Koreas’ defense chiefs signed during a summit between the two sides last September.

In line with the CMA, the two sides were supposed to exchange lists of the staff for the excavation project by the end of February. But they missed the deadline as Pyongyang was then preoccupied with the Hanoi summit that collapsed due to gaps over the extent of denuclearization and sanctions relief.

Seoul sent the list of its own excavation staff to the North on March 6, but the communist regime has yet to respond.

Amid concerns that Pyongyang’s uncooperative stance could derail the CMA’s enforcement, Seoul officials insisted that the two sides have been on track to keep the spirits of the accord by halting all hostile acts against each other.

In accordance with the CMA, the two sides have so far set up ground, maritime and air buffer zones, disarming the Joint Security Area and removing some border guard posts.