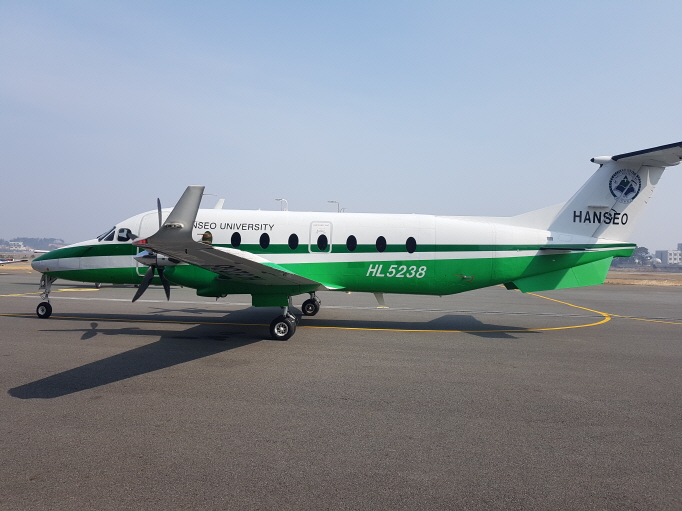 An airplane to be used in the government’s aerial observation of fine dust. (image: Ministry of Environment)

SEOUL, Mar. 8 (Korea Bizwire) – A South Korean government laboratory said Friday it will conduct an aerial observation of flows of pollutants over the Yellow Sea to trace the origins of fine dust concentrations over the Korean Peninsula.

The National Institute of Environmental Research (NIER), affiliated with the Ministry of Environment, said it will mobilize a 19-seat airplane for a month to intensively observe fine dust particles over the waters between South Korea and China.

The aerial observation will begin Saturday, with a total of 20 flights planned for 100 hours of observation over a period of 30 days, NIER officials said.

The state-run laboratory has previously used a smaller plane for a limited observation of aerial pollutants. It plans to utilize the results of the monthlong observation in future negotiations with China over responsibility for fine dust particles over the peninsula.

Over the past week, most of South Korea, including Seoul, was hit by heavy concentrations of ultrafine particles that were about six times higher than the maximum density recommended by the World Health Organization.

The daily average of particles smaller than 2.5 micrometers in diameter surged close to 150 micrograms per cubic meter in Seoul early this week, the highest levels since record-keeping began in 2015.

President Moon Jae-in ordered his government Wednesday to work with China to fight fine dust pollution. Moon instructed the government to discuss dust-reducing measures with China and look into the possibility of jointly creating artificial rain over the sea between the two countries. South Korea’s state-run agencies have said pollutants coming from China are responsible for about 50 to 70 percent of the air pollution over the peninsula.

But China’s foreign ministry has denied responsibility for fine dust over the Korean Peninsula, asking Seoul to produce scientific evidence.

The NIER said its observation plane will carry nine sets of fine dust analysis equipment to scientifically study the origins of air pollutants coming from abroad.

On Thursday, South Korea’s government said it will push to team up with China to take emergency measures on reducing fine dust.

Environment Minister Cho Myung-rae, announcing the government’s special measures to fight fine dust pollution, said Seoul will ask Beijing to conduct a joint artificial rain experiment over the sea between the two countries this year to help reduce dust levels in the region.