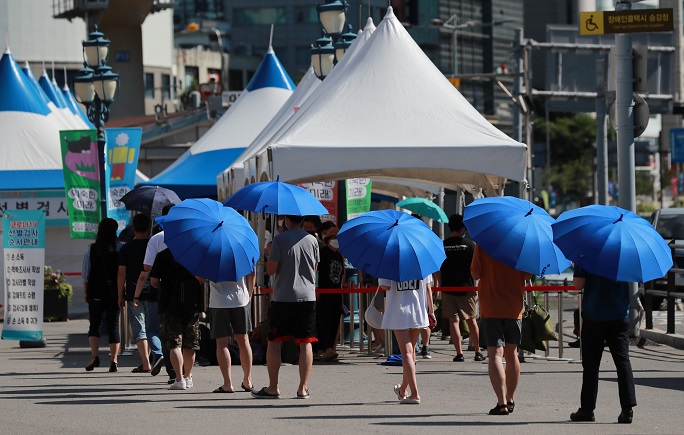 Citizens, holding umbrellas amid a heatwave, wait in line to receive coronavirus tests at a makeshift clinic in front of Seoul Station on July 18, 2021. (Yonhap)

Most regions outside the wider capital area have been placed under Level 2 measures, in which gatherings of more than eight people are banned.

But the government decided to toughen the antivirus scheme, as the non-Seoul metropolitan regions have also seen a surge in new cases in recent days.

Seoul, the surrounding Gyeonggi Province and the western port city of Incheon have been under the highest social distancing measures since last week, which enforces the four-person cap during daytime while prohibiting gatherings of more than two people after 6 p.m.

“One week has passed since we enforced the highest social distancing level in Seoul and the surrounding area. But the number of confirmed cases has not fallen,” Kim said, presiding over a meeting of the disaster management headquarters.

“We need to implement antivirus measures more swiftly than the speed of the spread of the virus,” he stressed.

The four-people cap will be in effect until Aug. 1, though there will be some exceptions, according to the government.

The exceptions include family members living at the same residence; children, old people and others in need of care; family members caring for loved ones on their deathbeds; and first-birthday banquets.

Heath authorities have recommended that fully vaccinated people not be counted in observing the four-people cap, though some regions, such as the southeastern city of Busan and the southern resort island of Jeju, do not offer such an incentive.

South Korea has been battling a new wave of the pandemic.

On Sunday, it added 1,454 COVID-19 cases, an all-time high for a Sunday, including 1,402 local infections, raising the total caseload to 177,951, according to the Korea Disease Control and Prevention Agency (KDCA).

Earlier in the day, President Moon Jae-in visited a COVID-19 testing station in Seoul and met with the medical staff working there amid a heat wave, according to his office.

“It is really heartbreaking to see medical workers soaked in sweat,” Moon said. “I am really sorry for letting you suffer this year again following last summer. Let’s overcome this for sure once again.”

Moon instructed officials to check on supportive measures for front-line workers, such as making a resting room equipped with air conditioning, to ensure their health, the presidential office Cheong Wa Dae said.