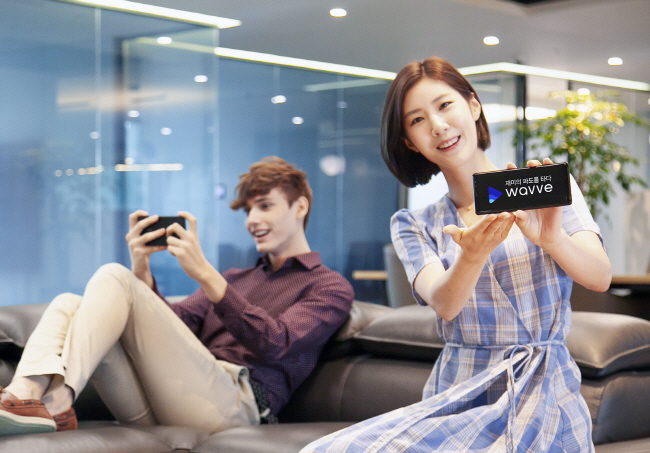 The local OTT industry is under fire from multiple fronts aside from growing pressure from Netflix. (image: Content Wavve Corp.)

SEOUL, Aug. 18 (Korea Bizwire) — South Korea’s media regulator said Tuesday it will form a support group for local over-the-top (OTT) media services to help compete with global rivals, such as Netflix Inc., as they take a dominant position in the local market.

Netflix’s active mobile application users in the country totaled 6.37 million in May, far outnumbering local rivals such as Wavve at 3.46 million and tving at 2.54 million, according to market researcher Nielsen KoreanClick.

Han Sang-hyuk, chairman of the Korea Communications Commission (KCC), called on local OTTs to work together as he expressed urgency over growing market influence from foreign players.

“Global services, such as Netflix, are expanding their influence. However, it is currently difficult for local OTTs to compete,” Han said during a meeting with executives from local OTT players Wavve, tving, Seezn and Watcha.

“We will form a support group for OTTs to gather voices from content and platform industries, civic groups and academics.”

“It is most important for local operators to make strategic agreements and cooperate in terms of content,” he added.

The remarks come as Netflix is set to increase its local presence after it became available on telecom operator KT Corp.’s IPTVs earlier this month.

The deal provides better access to Netflix for KT’s 8.5 million IPTV subscribers, according to the mobile carrier.

Meanwhile, the local OTT industry is under fire from multiple fronts aside from growing pressure from Netflix.

Local OTT services are currently in a dispute with the Korea Music Copyright Association over music copyright fees. The group has argued for a higher fee from the companies, comparable to levels paid by Netflix.

The local film distributor group, the Association of Korean Buyers & Distributors of Foreign Films, said it would halt its agreement to provide titles to local OTT services over a payment dispute.

“Talks are ongoing with the association. However, the films affected by the decision represent a minor part of our entire collection,” a Wavve spokesperson said.