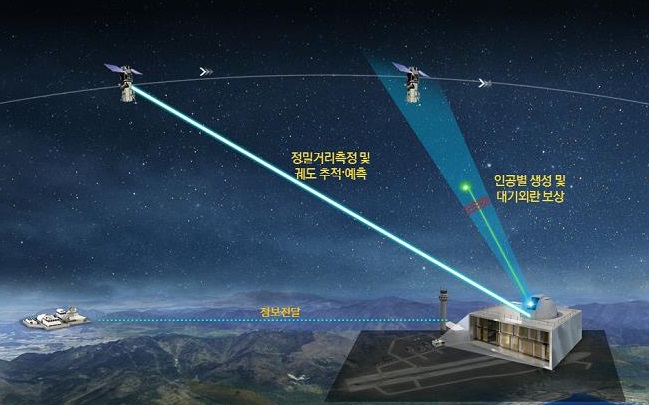 This image, provided by the Defense Industry Technology Center on Jan. 27, 2021, shows an artist’s rendition of a new laser-based technology to be developed to monitor objects in space.

The new laser-based technologies are aimed at better monitoring objects that fly over the Korean Peninsula amid an increase in the use of satellites for military purposes, according to the Defense Industry Technology Center.

Hanwha Systems Co. will lead the research project that will be joined by a number of companies and schools, including the Korea Astronomy and Space Science Institute, and supervised by the government by 2025, it said.

On Tuesday, the state-run technology center launched a meeting to review the detailed development plan with the participation of the arms procurement agency, the military and Hanwha Systems.

“With the new technologies secured through the project, our military will be able to build an independent laser-based satellite monitoring and space surveillance system,” center chief Uhm Dong-hwan said.

In November, Defense Minister Suh Wook vowed to enhance the country’s space capabilities by securing new assets, such as a military reconnaissance satellite, and setting up a system for joint space operations.