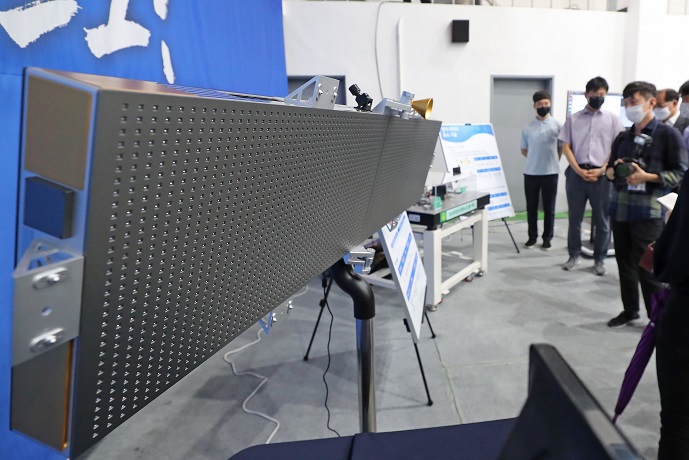 This file photo, taken Aug. 5, 2020, shows a mini satellite on display at the Agency for Defense Development’s testing center in Taean, 150 kilometers southwest of Seoul. (Yonhap)

SEOUL, June 18 (Korea Bizwire) — South Korea said Friday it will develop over 100 miniature satellites over the next decade with the aim of establishing a national security monitoring system and testing next generation network communications in its latest push to strengthen its space industry.

The Ministry of Science and ICT said it would pursue such satellite development to encourage the private sector’s involvement in the space industry as the mini satellites can be manufactured in a short amount of time at a relatively low cost.

South Korea’s space program has so far been driven by large-scale state-led projects, such as the launch of its first homegrown space rocket slated for October this year.

The ministry said it would pursue new mini satellite projects led by the private sector, such as optical and radar observation of the Korean Peninsula, as well as testing satellite communications network technology, to spur the local space industry’s development of mini satellites.

The country aims to launch 14 low earth orbit communications satellites by 2031 to establish a satellite communications network with the aim of preparing for 6G technology and testing autonomous ship control systems and marine traffic services.

The ministry added that it would also pursue developing 22 satellites by 2028 to observe radio wave activity in space, as well as 13 test satellites by 2031 to acquire future technologies, such as autonomous operation of satellite swarm and removing space trash.

South Korea has recently redoubled efforts in its space program, with the launch of its first lunar orbiter set for next year.