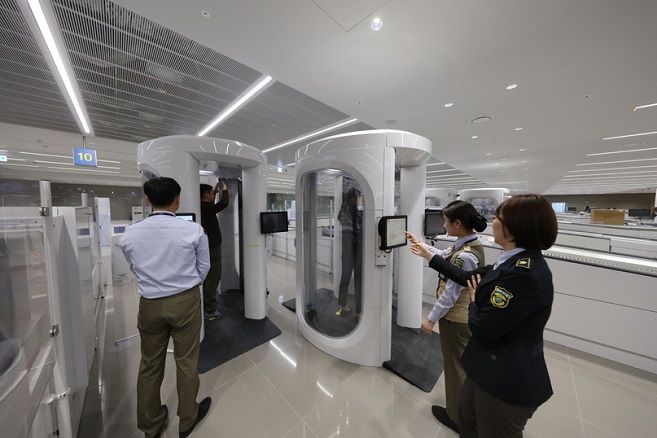 This undated file photo, provided by the land ministry on Jan. 12, 2018, shows a machine at a security checkpoint at Incheon International Airport, west of Seoul.

SEOUL, April 12 (Korea Bizwire) — South Korea said Tuesday it will introduce a new screening system at airports around 2027, a cutting-edge technology that could help passengers avoid the hassle of taking out laptops and liquid items for security checks.

The smart “walk through” system can detect laptops, radioactive materials, prohibited liquids and other items inside cabin baggage, which could shorten the screening process from the current 37 seconds to 7 seconds, according to the Ministry of Land, Infrastructure and Transport.

The new system is part of a 301.3 billion won (US$243.5 million) basic plan on aviation security, which calls for a set of measures to improve the security system at airports and other related facilities and to secure advanced technologies in the field.

The government also plans to earmark some 49.9 billion won over the next five years to develop advanced screening equipment that adopts such technologies as artificial intelligence and terahertz, in line with a growing need for an alternative transportation mode, such as urban air mobility.

The 2022-2026 plan also called for integrating information on aviation security, which is managed separately by the central government and related agencies, and digitalizing all related materials by 2023.

Those information will be used to set up a system designed to analyze terror attacks and cyberattacks against airports and aircraft by 2026 so as to prevent and better respond to such growing security challenges, according to the ministry.

It also vowed to set up a drone detection system at major local airports to effectively nullify illegal unmanned vehicles.

“We will also expand the mutual recognition of security standards with foreign aviation authorities to simplify the boarding process and to boost passengers’ convenience,” the ministry said.