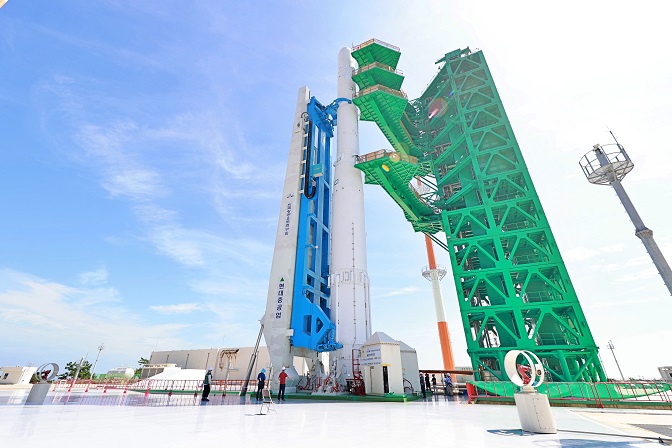 South Korea’s homegrown space rocket is erected on a launch pad before a wet dress rehearsal at the Naro Space Center in Goheung, South Jeolla Province, 473 kilometers south of Seoul, on Aug. 26, 2021, in this photo provided by the Ministry of Science and ICT.

SEOUL, Sept. 29 (Korea Bizwire) — South Korea will launch its first homegrown space rocket next month as it is in the final stages of preparations, the science ministry said Wednesday.

The Ministry of Science and ICT said the rocket, Nuri, will lift off Oct. 21 as scheduled at the Naro Space Center in Goheung, 473 kilometers south of Seoul.

The Nuri is now erected on a launch pad for a propellant fill test, known as a wet dress rehearsal, to check its systems in extreme climate conditions, the ministry said.

The ministry said it set the preliminary launch period from Oct. 22-28 considering the possibility of schedule changes depending on weather conditions.

The country has invested around 2 trillion won (US$1.8 billion) in the project since 2010 and finally unveiled a test model of the rocket in June this year.

The 200-ton Nuri will carry a 1.5-ton mock payload for the October launch ahead of its launch with a 200-kilogram satellite and a 1.3-ton dummy payload on May 19 next year.

In 2013, the country successfully launched its first-ever Naro space rocket, but its first stage was built in Russia.

The country has recently bolstered its space program, creating a new think tank to conduct space-related research to offer guidance for the country’s space development policies, as well as private sector efforts.