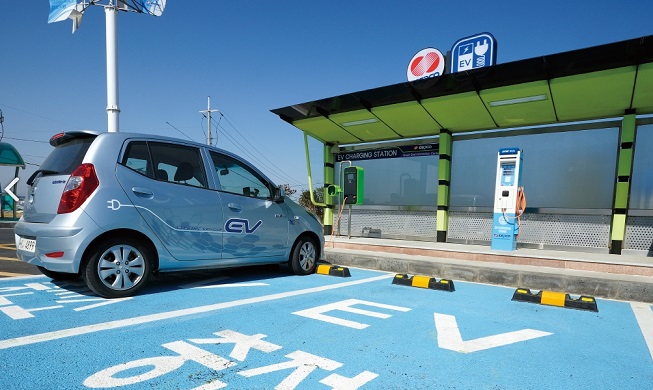 A charging station for electric vehicles set up by the Korea Electric Power Corp. (KEPCO) in Seoul. (image: KEPCO)

So far, 63 programs have been selected for so-called sandbox regulatory measures, which are exempted from strict regulations, according to the Ministry of Science and ICT.

The scheme was launched in Jan. 2019 with the aim of allowing local firms to catch up with innovation and to test various business models that are not permitted under existing rules.

The government is working on overhauling rules in many fields.

For instance, it is reviewing a scheme to allow commercial electric vehicle (EV) recharging using ordinary 220 Volt plugs, mobile notification services that can be used by both the public and private sectors, and small-scale foreign currency exchange services that can be conducted via automated teller machines.

The ministry said regulations will moreover be changed to make greater use of bio signals at various health and welfare facilities, permit automated controls at unmanned telecom base transmit stations, and revise guidelines to make it possible for several eateries to share a common kitchen area.

Besides these programs, existing rules on virtual reality motion simulators, solar power monitoring, use of mobile tech for car rentals, and new mobile driver’s license system that can be viewed on a special app, will be changed in the coming months as a result of the sandbox program, the ministry said.