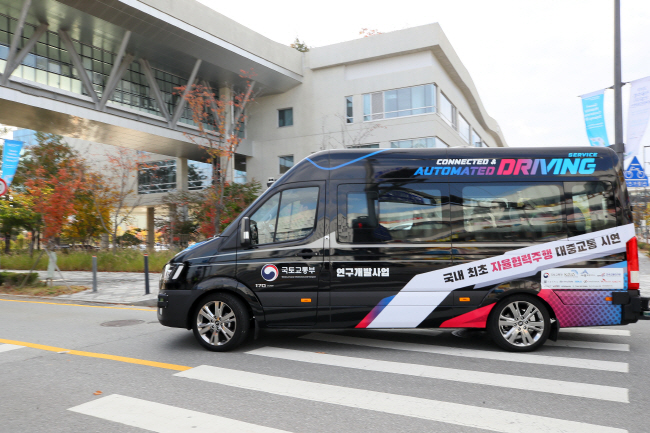 SEJONG, Oct. 30 (Korea Bizwire) — A simple tap on a smartphone screen can bring a bus to your selected location. And don’t be surprised if the driver’s hands are not on the wheel.

The proposed service is an illustration of South Korea’s efforts to develop future vehicles and related services amid growing global competition.

The Ministry of Land, Infrastructure and Transport said it will begin testing autonomous buses in South Korea’s administrative hub of Sejong next month.

A human backup driver will be behind the wheel during the tests in a 9.8-kilometer-long designated section with ordinary vehicles in Sejong.

No ordinary citizens can ride the driverless buses during the tests that are set to end in 2021, according to the ministry.

South Korea plans to offer commercial self-driving bus service with backup drivers for ordinary citizens in Sejong in 2022 before expanding the service to other regions. The backup drivers can step in if anything goes wrong.

One feature of the proposed autonomous buses will be stopping at locations designated by passengers, which will especially help those who are physically handicapped.

They will be able to select spots for pickup or drop-off through their smartphone applications, according to the project officials.

“The bus will recognize passenger demand at each station and will operate based on that data,” Kang Kyung-pyo, a researcher at the Korea Transport Institute (KOTI), said during an autonomous bus test operation for reporters in Sejong on Tuesday.

“For the elderly and the handicapped, the bus will offer pickup and drop-off services, and they can select the spots on a smartphone application.” 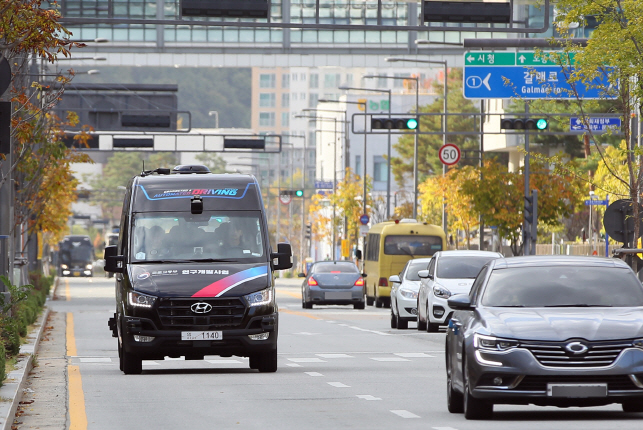 Currently, buses with Level 3 autonomous driving technology are under test operation. At Level 3, a vehicle can self-operate in a stable driving environment but requires human intervention in certain situations.

In a test drive of a 15-seat mini autonomous bus — developed by KTI, Hyundai Motor Co., SK Telecom Co. and Seoul National University — the bus was able to change lanes and stop in front of crosswalks even though other cars were around.

The test operation was conducted on a 4-kilometer-long section, with the bus able to drive at a maximum speed of 40 kilometers per hour.

“The bus uses not only data from its sensors but also real-time traffic information,” Kang said.

“For instance, if the bus is to make a left turn at a crossroad, it analyzes the time duration of the left turn signal and makes the move when it is considered safe.”

During the test operation, the bus was switched to manual mode at a roundabout and in school zones to prevent possible accidents.

Officials said autonomous buses can be unlocked from the self-driving mode simply by the driver putting his or her hands on the steering wheel.

The ministry officials said eight buses with Level 4 autonomous driving technology will be able to operate in 2021, covering a some 35.6-kilometer-long section.

Level 4 is considered to be fully autonomous driving, with vehicles able to handle the majority of driving situations.