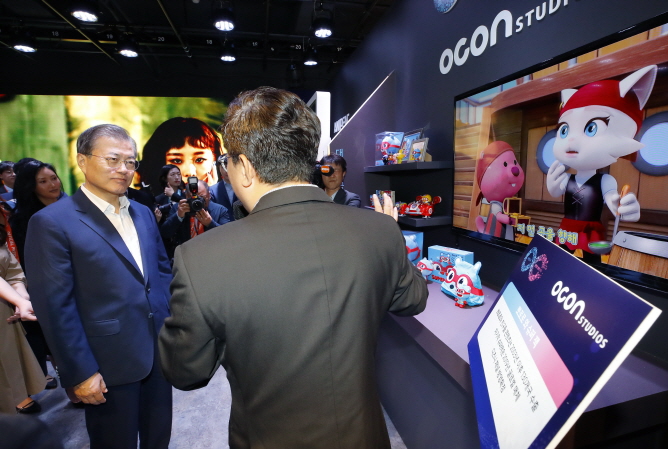 President Moon Jae-in (L) is briefed on the animated character Pororo before unveiling South Korea’s three innovation strategies for the content industry at the Korea Creative Content Agency in Seoul on Sept. 17, 2019. (Yonhap)

The government will spend 450 billion won by 2022 in a “content venture investment fund” aimed at offering financial support in the planning and development phase, according to the culture and science ministries.

It also plans to offer 740 billion won of loan guarantees to developers and producers of various contents, including K-pop, K-dramas, animation, online games and other digital media contents, by the year.

The ministries reported a related three-point strategy to President Moon Jae-in during an event held at the Seoul campus of the Korea Creative Content Agency.

In a speech, Moon described the content industry as an “important future growth engine” for South Korea’s economy, not just a culture field.

He said the industry has “infinite growth potential,” calling it a “soft but strong power” to enhance the brand value and competitiveness of South Korea.

Moon added his administration will make “aggressive investments” in creators and related businesses for their creativity and innovation so that South Korea can become an “economy-culture powerhouse.”

South Korea has emerged as the world’s seventh-largest content provider, having become a “culture exporter” in 2012 from a “culture importer,” Moon said.

The culture minister said, “At a time when allure and storytelling have competitiveness in all sectors, the growth of the South Korean content industry is leading the advance of related industries and making South Koreans proud of the local content market.”

He added, “All government agencies will join hands to proactively help content creators fulfill their dreams and the Korean content market make a leap.” 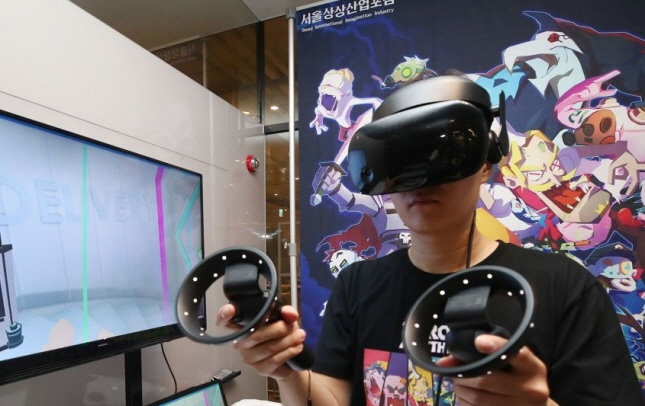 South Korea hopes to capitalize on its ICT power, especially technology on the 5G networks.

It will promote the practical use of such technologies — virtual reality (VR) and augmented reality (AR) — in sectors like defense, medical services and education.

Another major pillar of the strategy involves connecting the global growth of “hallyu,” the phenomenon of Korean pop culture content’s popularity overseas, with exports of Korean consumer products.

The government will dedicate the Olympic Gymnastics Arena in eastern Seoul exclusively to K-pop concerts and build a new stadium for e-sports in a bid to lure in more Korean culture lovers from outside of Korea.

It will also help expand the global network of the King Sejong Institute, a government-sponsored Korean language education organization, to some 220 outlets across the globe.

The comprehensive program is expected to bring the South Korean content industry’s annual sales and exports to over 150 trillion won and $13.4 billion, respectively, by 2022, according to the government.

Boosted by the planned support package, the government said, the number of medium-sized content firms with sales of over 10 billion won is expected to rise to 2,000 from some 1,700 as of now.

It would drive up the size of employment by the sector to some 700,000 workers and the annual volume of hallyu-driven foreign tourists to some 180,000 by 2022, the government added.

“The content sector is a high-risk and high-return industry, where the government hopes to lure bold, aggressive investment,” First Vice Culture Minister Kim Yong-sam said in a separate press conference.