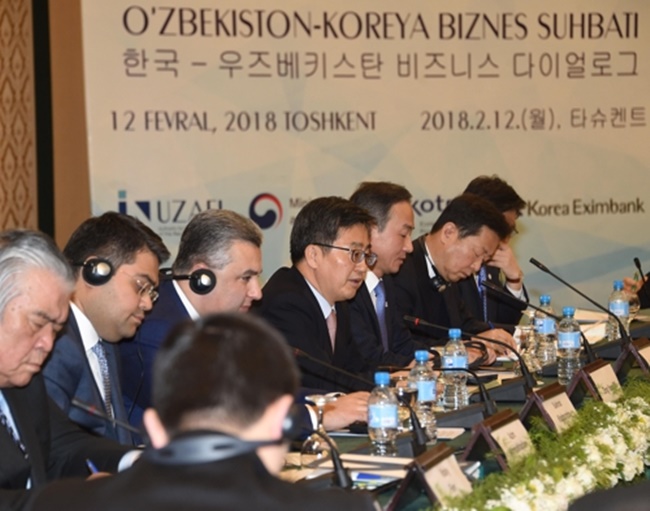 South Korean Finance Minister Kim Dong-yeon (4th from R) speaks during a meeting in Tashkent, Uzbekistan, on Feb. 12, 2018. The meeting was attended by businessmen and government officials from both countries. (Image: Ministry of Finance)

SEJONG, Feb. 12 (Korea Bizwire) – Businessmen from South Korea and Uzbekistan held a meeting in Tashkent on Monday to push for greater cooperation between the two nations, Seoul’s finance ministry said.

The meeting, also attended by government officials from the both sides, including South Korean Finance Minister Kim Dong-yeon, was arranged to hear the voices of businessmen.

Their planned talks are a follow-up measure to a summit meeting between South Korean President Moon Jae-in and Uzbek President Shavkat Mirziyoyev in November of last year, it added.

As part of efforts to upgrade the countries’ bilateral relationship, the two leaders agreed to expand exchanges between ranking government officials and also expand areas of cooperation.