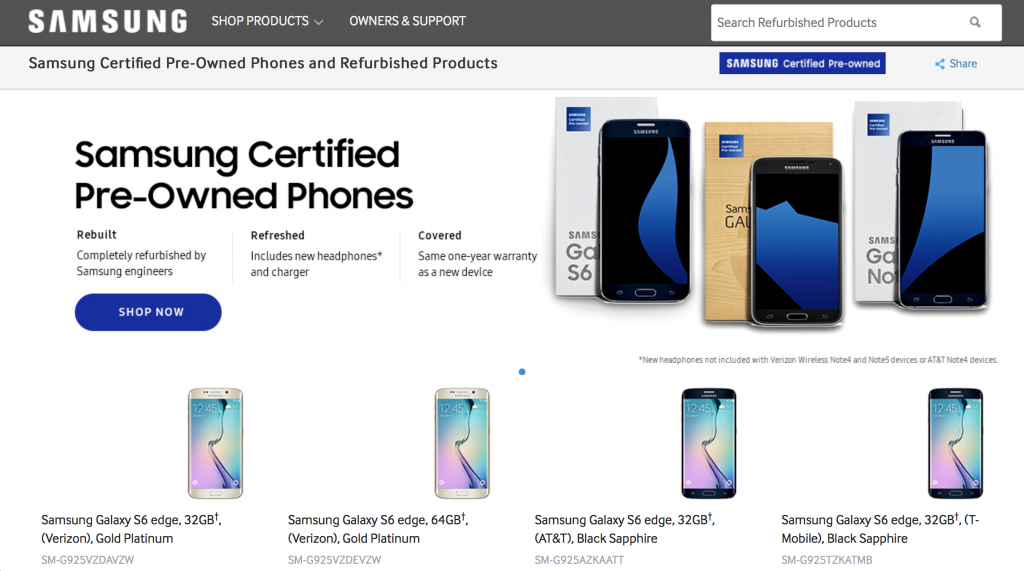 Although refurbs of the latest models – the Galaxy S7 and S7 Edge, and the controversial Galaxy Note 7 – are not yet available for purchase, industry watchers see a high probability of their addition to the Samsung’s refurb store in the near future.

SEOUL, Sept. 5 (Korea Bizwire) – Last week, Samsung Electronics announced a historic recall of its Galaxy Note 7 after confirming that some of the phones had faulty batteries. Ironically, on the same day, the electronics giant launched sales of refurbished smartphones in the United States. Experts now anticipate that Samsung’s phablet of concern may also make its way into the refurbished market.

Refurbishments, or refurbs, are products that have been returned to the manufacturer for various reasons, usually for technical failings, and are reintroduced after the faults are repaired. For this reason, refurbs come in at lower prices, and their sale is often regarded as an eco-friendly practice.

Samsung started online sales of refurbished devices in the U.S. on September 2, including the Galaxy S4, S5, S6 and S6 Edge, Note 3, and Note 4, all of which are being sold with 30 to 50 percent price discounts. The devices will also come with a 12-month warranty and free shipping when purchased from Samsung’s official refurb store.

Although refurbs of the latest models – the Galaxy S7 and S7 Edge, and the controversial Galaxy Note 7 – are not yet available for purchase, industry watchers see a high probability of their addition to the Samsung’s refurb store in the near future. Given the 2.5 million Galaxy Note 7s that Samsung is expected to recoup as part of its recall, it is likely that the Korean tech giant will replace the defective batteries and put the phones up for sale.

Samsung has yet to make an official statement regarding the refurb sales of the new phablet, however.

“We have not yet reviewed the matter, but we will,” said Ko Dong-jin, president of Samsung Electronics’ mobile division during a press conference on September 2.

Another Samsung official also said that although sales of older refurb products in the U.S. have begun, “it is still unclear if refurb sales will expand to other countries, and if they will include the Galaxy Note 7.”

According to industry watchers, the market for refurbs is on the rise, and many analysts anticipated Samsung’s market entry last month, shortly after the release of the new phablet – a prediction which became true less than a month later.

Market research firm Strategic Analysis said the market for refurbished phones grew by 10 percent in 2015, and is expected to increase by 14 percent this year, with higher demand for refurbs in Asia-Pacific and Central and South America.