Hyundai Motor suspended its plant in Alabama on March 18 (local time) after one of its employees there was infected with the COVID-19 virus, according to Hyundai Motor Group.

On the following day, Kia Motors halted its factory in Georgia due to a lack of engines assembled and delivered from Hyundai’s Alabama plant, a group spokesman said over the phone.

“We will decide on when to resume the plants’ operations through consultations with the U.S. health authorities,” he said.

The United Auto Workers union and Detroit automakers — Ford Motor Co., General Motors Co. and Fiat Chrysler Automobiles — agreed Tuesday (local time) on coronavirus-mitigation efforts, while other U.S. car factories could be forced to cut production if sales plummet or the virus spreads to their workers.

Hyundai and Kia have one plant each in the world’s most important automobile market.

On top of their U.S. plants’ suspension, Hyundai and Kia said they will suspend plants in the Czech Republic and Slovakia, respectively, for two weeks from March 23 through April 3 due to virus-caused supply disruptions.

Hyundai’s plant in Turkey is still in operation. Hyundai has two plants and Kia has one in Europe.

Local carmakers already suffered production losses due to a lack of parts when their suppliers in China suspended plants due to an extended Lunar New Year holiday amid fears of COVID-19 infections.

The worsening outbreak is now dealing a further blow to the automobile industry as the Detroit automakers have agreed to close all U.S. plants and European carmakers such as BMW and Mercedes-Benz have begun to shut down plants in Europe.

A prolonged coronavirus outbreak would drive down vehicle sales, and carmakers are expected to report poor earnings results this year, industry officials said. 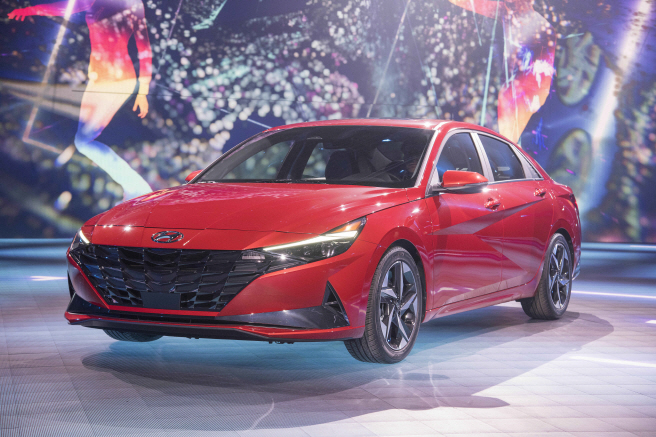 This photo, provided by Hyundai Motor Co., shows the all-new Avante compact car that the South Korean carmaker disclosed at a world premier event in Los Angeles on March 17, 2020.

As European countries close their borders and restrict movement in an effort to slow the spread of COVID-19, the automobile business will bear the brunt of the virus’ economic impact, Kim Tae-nyen, vice president of the Korea Automobile Manufacturers Association (KAMA), said.

“Global vehicle demand is likely to plunge as it did during the 2008 financial crisis if the virus outbreak continues for more than three months without being contained. A sharp decline in exports would cut into the carmakers’ bottom line this year,” he said.

Jose Munoz, chief executive of Hyundai Motor’s North American division, said in an interview with Automotive News that he expects Hyundai’s U.S. sales to fall by 10 to 20 percent this year if the virus outbreak continues.

Kia has eight domestic plants — two in Gwangmyeong, three in Hwaseong and three in Gwangju — and seven overseas ones — three in China and one each in the U.S., Slovakia, Mexico and India. Their overall capacity is 3.84 million units.

Hyundai and Kia, which together form the world’s fifth-biggest carmaker by sales, were targeting a bigger share in the U.S. by launching new models this year.

The new models include the GV80 SUV and G80 sedan to be launched under Hyundai’s independent Genesis brand in the first half of 2020 and Hyundai’s Tucson SUV and Kia’s Sportage SUV and Carnival van to be released in the second half.

As their domestic sales and exports continued to fall in January and February, the virus crisis will deal a bigger blow to the South Korean units of GM, Renault S.A. and Mahindra & Mahindra Ltd.