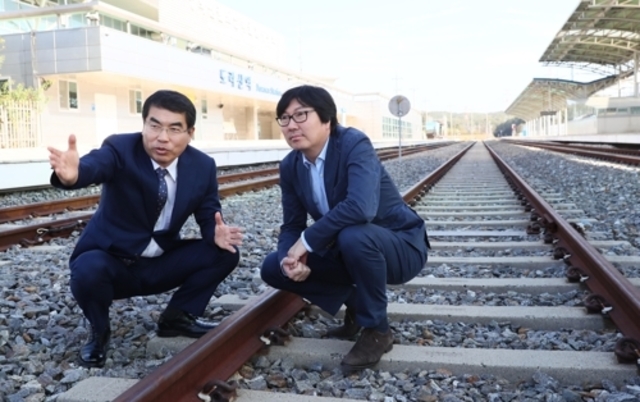 Gwangmyeong Mayor Yang Ki-dae (L) talks with former French Minister for Government Reform and Simplification Jean-Vincent Place during their trip to Dorasan Station, South Korea’s northernmost station in the border town of Paju, north of Seoul, on Oct. 16, 2017, in this photo released by the Gwangmyeong municipality. (image: Yonhap)

GWANGMYEONG, South Korea, Oct. 16 (Korea Bizwire) – The South Korean city of Gwangmyeong, just south of Seoul, said Monday it will sign a memorandum of understanding with French national railway company SNCF this year to implement a Eurasia railway project to connect South and North Korea by rail to Europe.

Former French Minister for Government Reform and Simplification Jean-Vincent Place, who is visiting the South Korea city, delivered a proposal to form the deal on behalf of SNCF to Gwangmyeong Mayor Yang Ki-dae on the same day they visited Dorasan Station, South Korea’s northernmost station in the border town of Paju, north of Seoul.

Yang will make a trip to France early next month for talks with officials of the French railway company to agree on details.

The South Korean city hopes it will build up Gwangmyeong Station as the starting point for the envisaged railway, if operational.

SNCF has been implementing projects to develop international railways in Shanghai and Vladivostok and commercial areas adjoining them.

“We are implementing the Eurasia railway project just in case the inter-Korean railway system is opened sometime in the future,” Yang said. “The joint project with SNCF will be tantamount to becoming a message of peace and prosperity toward the world.”

Since last year, Gwangmyeong has strengthened its relations with key gateway cities on the Eurasian railway that include China’s Dandong and Hunchun, Russia’s Hassan and Irkutsk, and the Mongolian capital of Ulaanbaatar.