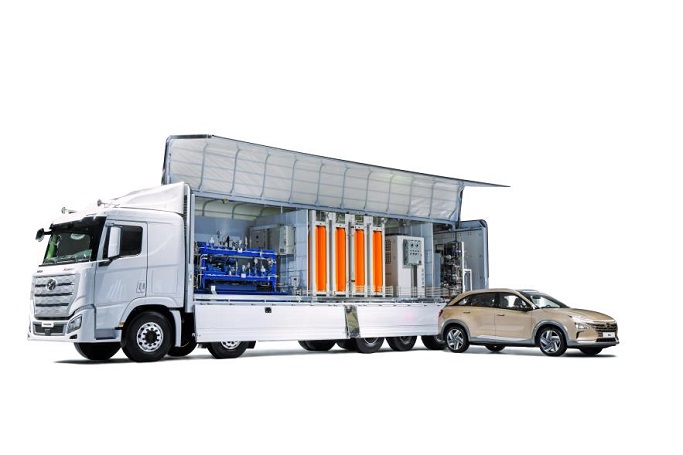 This photo, provided by Hyundai Motor Group, shows a rendering of a movable hydrogen charging station. On Sept. 7, 2021, the South Korean carmaker announced a vision to popularize hydrogen by 2040, under which it will apply fuel cell systems to all commercial vehicles by 2028.

SEOUL, Sept. 8 (Korea Bizwire) — Major South Korean companies are betting big on hydrogen across sectors as they strive to shift from carbon-intensive businesses to a more sustainable model and capture new opportunities in the emerging energy sector.

Hydrogen can offer solutions in fields ranging from transport to energy storage as an alternative to fossil fuels and is an important pillar of the government’s plan to reach net zero emissions by 2050 and develop renewable energy industries.

To join forces, heads of 10 conglomerates, including Hyundai Motor, SK, POSCO, Lotte and Hanwha, on Wednesday launched Korea H2 Business Summit, which is the Korean version of the Hydrogen Council — a global coalition of CEOs committed to expediting the energy transition with hydrogen.

Hyundai Motor Group, the world’s fifth-largest automotive group, has committed 11.1 trillion won for its hydrogen business based on its expertise in developing the fuel cell system for vehicles and has been increasing investment as part of its electrification push.

Its flagship unit Hyundai Motor Co. said it will apply the hydrogen fuel-cell system to all of its commercial vehicle models by 2028 and increase its fuel cell electric vehicle (FCEV) lineup to three, up from the sole model Nexo SUV.

An FCEV is an eco-friendly vehicle that only emits water vapor as it converts stored hydrogen into electricity, which turns the vehicle’s motor.

The automaker aims to apply the hydrogen fuel-cell systems in a broad range of areas, including other mobility solutions, such as trains, ships and urban air mobility (UAM), as well as homes, buildings and plants.

“The goal is to make hydrogen readily usable for everyone, everything and everywhere,” Chairman Chung Euisun said during the Hydrogen Wave conference Tuesday. “We aim to help foster a worldwide hydrogen society by 2040.” 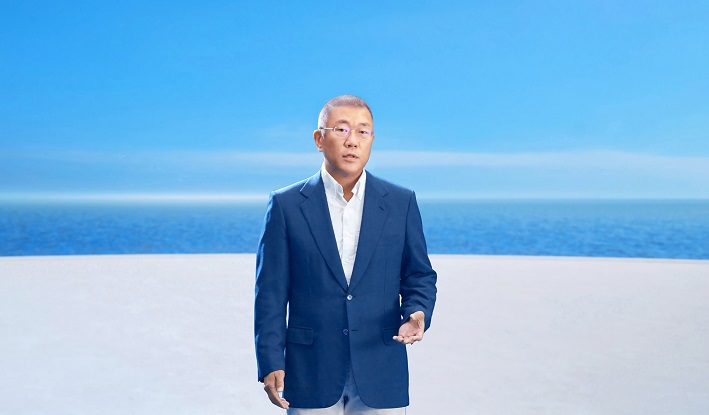 SK Holdings, the group’s holding firm, set an annual hydrogen production target of 280,000 tons by 2025 to supply it to petrol stations and fuel cell power plants.

“SK will utilize the group’s infrastructure to mass produce hydrogen and secure a comprehensive value chain ranging from production, logistics and distribution,” SK said in a statement.

“The company will also target the global hydrogen market by investing in companies with hydrogen technologies and forging partnerships with other industry players.”

SK E&S said it will also begin producing 250,000 tons of “blue” hydrogen per year in 2025 using its imported natural gas and develop “green” hydrogen technology in the long term.

Green hydrogen is the cleanest variety as it uses renewable energy to produce hydrogen from water. 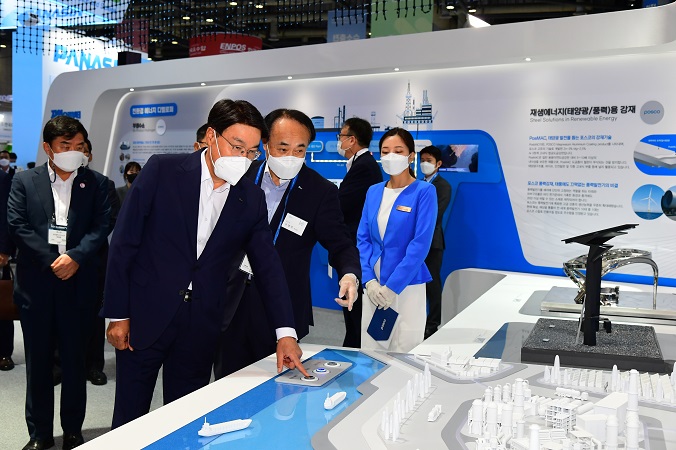 POSCO Chairman Choi Jeong-woo visits the company’s exhibition booth at a H2 Mobility+Energy Show, a hydrogen industry fair that opened in Ilsan, north of Seoul, on Sept. 8, 2021, in this photo provided by the steelmaker.

POSCO, the world’s fifth-largest steelmaker by output, said it plans to use innovative technologies, such as Carbon Capture, Utilization and Storage (CCUS), and hydrogen-based steelmaking, to become a competitive low-carbon steel producer.

“We will renovate the steel making process by utilizing hydrogen, which doesn’t emit CO2,” POSCO Chairman Choi Jeong-woo during a H2 Mobility+Energy Show, a hydrogen industry fair held in Ilsan, north of Seoul.

POSCO said it will invest 10 trillion won by 2030 to expand its hydrogen business and establish supply chains, targeting 5 million tons of annual hydrogen production and 30 trillion won of sales by 2050.

The company currently produces 7,000 tons of hydrogen per year, mostly using natural gas and byproducts from its power plants.

Lotte Chemical Co., a major South Korean petrochemical company, said it will invest 4.4 trillion won in the hydrogen business by 2030 to cut its carbon emissions and foster the new growth driver.

As the first step, the petrochemical unit of Lotte Group plans to build a pilot plant to mass produce hydrogen storage tanks, a key part of FCEVs.

Lotte Chemical said it aims to generate 3 trillion won in annual sales and achieve 10 percent of its operating profits from the hydrogen business over the next decade.

The firm also said it will pump out about 600,000 tons of clean hydrogen using its eco-friendly production technology, setting a goal of taking up 30 percent of the domestic hydrogen market by 2030.

To further boost demand in various industrial areas, it plans to build new hydrogen fuel cell power plants and hydrogen fueling stations across the nation by 2030.