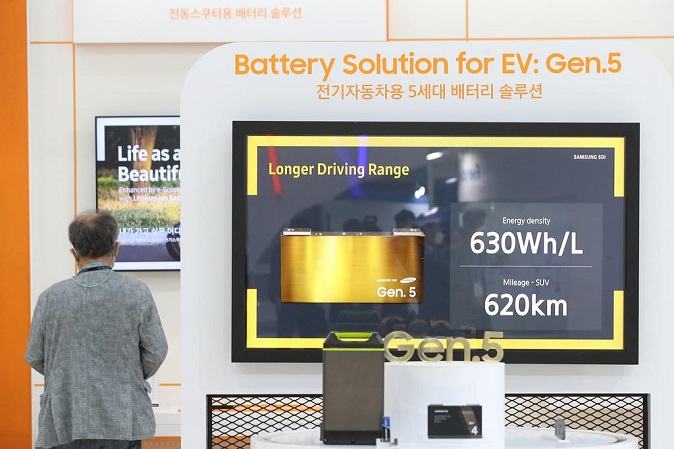 A visitor looks at Samsung SDI’s fifth-generation battery for electric cars at the InterBattery 2021 at COEX in Seoul on June 9, 2021. (Yonhap)

The Federation of Korean Industries reported that China and Germany raised their share of the world’s battery-based electric vehicle (BEV) export market by 9.5 and 3.8 percentage points, respectively, as of last year.

China’s rise in the BEV market share is attributed to a 513.9 percent increase in Chinese car exports to the EU.

The EU is the world’s largest BEV importer, with China expanding its market share from 4.2 percent in 2020 to 15.9 percent last year.

The market share of Chinese battery makers like CATL, BYD, CALB and others in the global EV battery market, including lithium-ion batteries, grew from 38.4 percent in 2020 to 48.7 percent in 2021.

Setting aside the Chinese market, South Korea’s share of the global battery market reached 57 percent last year, up by 4.6 percentage points from the previous year to secure its position as the world’s largest battery producer.