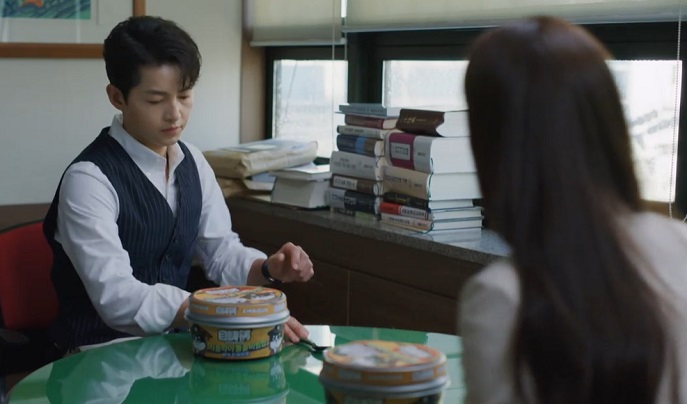 This image, captured from the broadcast of “Vincenzo,” shows controversial ‘eating instant Chinese bibimbap’ scene from the TV series on tvN.

In the eighth episode of the dark comedy that aired on March 14 on tvN, an instant Chinese bibimbap brand was exposed while the lead characters Vincenzo (Song Joong-ki) and Cha-young (Jeon Yeo-bin) have a meal.

Bibimbap is a popular Korean dish consisting of a bowl of warm white rice topped with seasoned vegetables and chili pepper paste.

Korean viewers frowned upon the fact that Chinese bibimbap appeared on a Korean drama amid the recent Chinese claims that some elements of Korean culture, including kimchi, originated from China.

Producers of “Vincenzo” said they have already canceled exposure of the Chinese product in videos on Korean streaming platforms.

It will likely take two or three more days for them to remove the controversial clips from overseas streaming platforms, they added. “Vincenzo,” which started its broadcasting on Feb. 20, is also available on Netflix.

The move came as South Korean people have raised their voice against increasing Chinese influence on the Korean entertainment industry.

Some previous and upcoming TV series that are known to be based on Chinese originals or have Chinese sponsorship deals have been under fire for recklessly importing Chinese culture.

The historical fantasy “Mr. Queen,” a remake of the Chinese web drama “Go Princess Go,” was also embroiled in anti-China sentiment and controversy over the distortion of history.