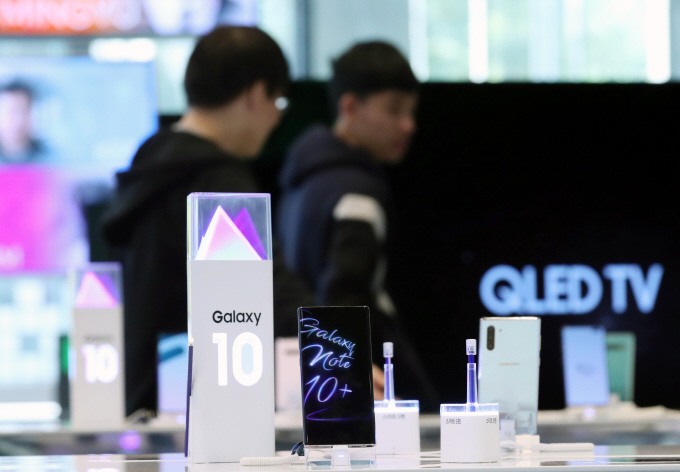 SK Telecom Co., KT Corp. and LG Uplus Corp. booked increased sales in the July-September period from a year earlier, but all of them saw operating profits shrink over the period, according to their regulatory filings.

KT saw its sales rise 4.5 percent to 6.2 trillion won, but its operating profit shed 15.4 percent to 312.5 billion won over the three-month period.

All of the companies said their increased expenditures for 5G infrastructure buildup and marketing costs hurt their profitability, underlining their intensive investment for the ultra-fast network since their commercial rollout in April.

The good part is that their heavy investment in the early stage contributed to a rapid rise of 5G subscribers here, who pay higher monthly bills.

The number of 5G users by the three telecom operators rose to 3.48 million as of the end of September, according to industry data.

SK Telecom took a lead with a 44.3 percent market share, followed by KT with 30.4 percent and LG Uplus with 25.3 percent.

In line with a rise in 5G subscribers, the three carriers posted hikes in the average revenue per user in the third quarter, which analysts saw as an encouraging sign for their business prospects.

The telecom players said they will continue to expand the 5G coverage across the nation to improve the service quality but expected to spend less on marketing costs compared with the early months of the 5G service.

“The wireless sales by the three telecom operators grew 2 percent in the third quarter compared with the previous quarter,” Kim Hong-sik, an analyst at Hana Financial Investment, said in a report.

“The companies are expected to post better earnings in the fourth quarter when the growth pace of sales surpasses that of spending.”