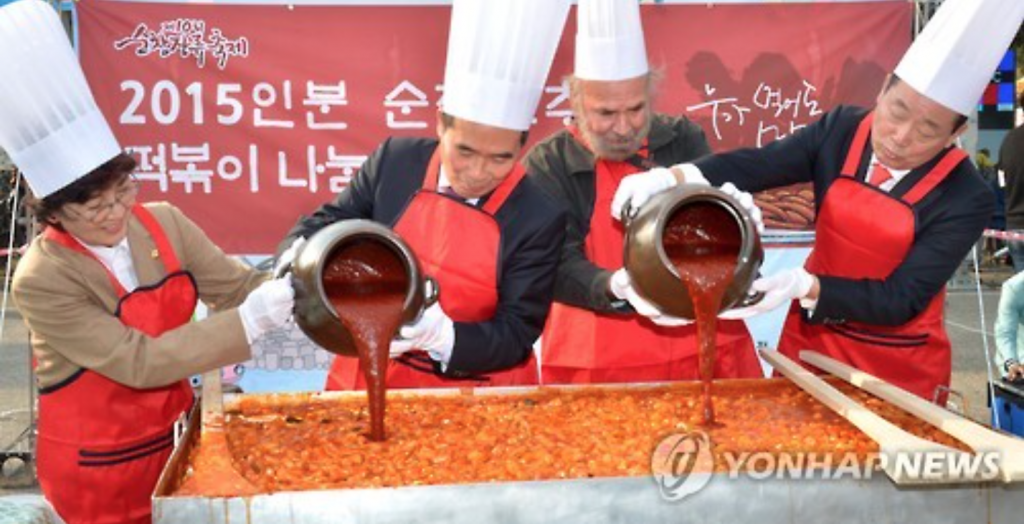 SEOUL, Oct. 13 (Korea Bizwire) – An annual festival for Korea’s most beloved traditional sauce kicked off in the southern rural village of Sunchang on Thursday, hailing tourists and sauce lovers from home and overseas.

The 11th “Sunchang Fermented Soybean Product Festival” runs from Thursday to Sunday to celebrate the cultural heritage of different categories of “jang,” a thick paste made from blocks of soy bean called “meju” and jarred in earthenware for natural fermentation. Some of the most popular jang include pepper-spicy “gochujang” and soy bean-based “doenjang.”

Although different regions have developed different recipes for their specialty jang, Sunchang County, North Jeolla Province, has established “Sunchang gochujang” as its signature good with a strong brand image.

Every year, the municipality of Sunchang has hosted the local festival in Sunchang Traditional Gochujang Folk Village, a village abounding with jang-filled jars stored in the backyards of hanok, or Korean traditional houses. The folk village is best known for its cave storage for sauce from all around the world, which stands as the world’s largest of its kind.

Under the theme of “globalization of Sunchang’s all-natural taste,” the four-day local fest offers some 70 events related to the region’s jang specialties. In the festival, participants can take part in cooking sessions for homemade gochujang and other kinds of jang. They are also invited to take part in cooking bibimbap, a rice bowl with assorted vegetable and spicy-hot gochujang, and 2016 servings of tteokbokki, or strings of rice cakes boiled in gochujang.

Also open to visitors are earthenware making class, eel catching games and a ceremony of presenting Sunchang gochujang to the king.

The annual festival has been recommended by the Ministry of Culture, Sports and Tourism for the third consecutive years for its excellence in preserving and celebrating the cultural heritage of Korean traditional ingredients.

“The festival is full of exploring the world of Korean jang and other sauces from all around the world, and we hope many will return home with great family experiences,” said Hwang Suk-Ju, mayor of the Sunchang County.