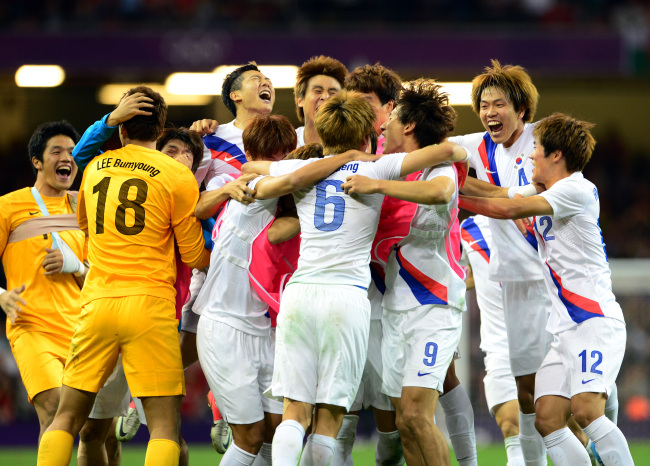 At the 2012 London Summer Games, South Korea went on to win the bronze, their first-ever medal in Olympic football. (image: Yonhap)

SEOUL, Jun. 21 (Korea Bizwire) — More than half of South Korean television viewers are looking forward to watching football matches in this summer’s Rio de Janeiro Olympics, according to a survey released Monday by a state-run ad agency.

The survey, conducted by the Korea Broadcast Advertising Corp. (KOBACO) on people aged 10 through 59 living in the metropolitan area, shows that 53.8 percent of the respondents singled out football as an event they would watch most during the Aug. 6-22 competition.

Archery came next with 33.1 percent, followed by rhythmic gymnastics and swimming with 14.6 percent each, and judo with 9.9 percent, the survey said.

Of the respondents, 27.2 percent like to watch the performance of football player Son Heung-min most, making him top the list of athletes worthy of public attention, with archer Ki Bo-bae and badminton player Lee Yong-dae coming next with 14.5 percent and 10.3 percent, respectively.

The survey also revealed that South Koreans are showing keen interest in the Olympics, with 88.2 percent saying they are looking forward to the athletic event and 75.4 percent responding they will increase their TV viewing time during the event. About 88 percent said they will follow local media coverage of the Olympics.

It also said six out of 10 people expected South Korea will finish in the top six to 10 in the Olympics.’