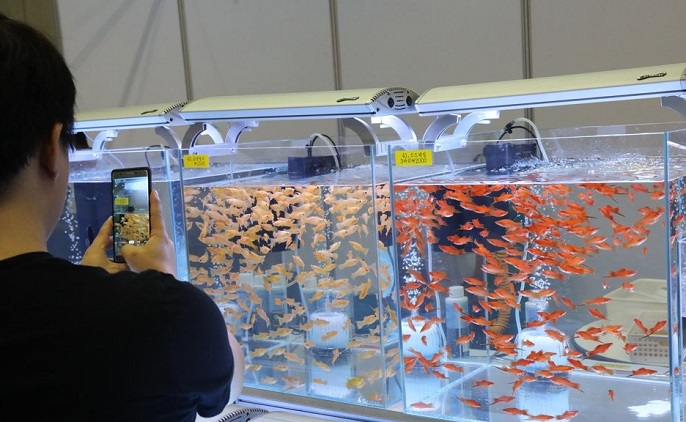 A visitor looks at displays at the 5th Korea Aquarium Fish Fair, organized by the oceans and fisheries ministry, at an exhibition center in Goyang, north of Seoul, on Aug. 16, 2019. (Yonhap)

SEOUL, March 22 (Korea Bizwire) — South Korea said Monday it will seek to expand the size of the local pet fish market by 35 percent through 2025 by developing more homegrown species while encouraging the public to adopt them.

Over the period, the number of farms raising pet fish will increase to 186 from the current 151. The annual production of related products, including feed, will rise to 121.8 billion won, up from 90.3 billion won in 2020.

South Korea earlier implemented a five-year development plan for the industry, which ran from 2016 to 2020. Over the period, the size of the country’s pet fish market shot up 19 percent.

To further bolster the growth, South Korea plans to ease its dependence on imported fish breeds and instead foster more homegrown species.

The new blueprint also includes plans to install fish tanks at public facilities, including airports, and create educational content that can be utilized at local schools.