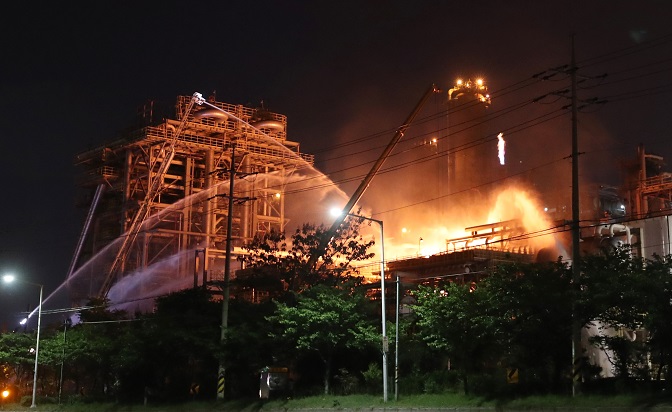 Firefighters work to put out a fire at a refinery run by S-Oil Corp. on May 20, 2022, following an explosion that killed one and injured nine others. (Yonhap)

ULSAN/SEOUL, May 20 (Korea Bizwire) — The head of S-Oil Corp. apologized Friday over the explosion at the company’s refinery unit in the country’s southwest that left one person killed and nine others injured, vowing all-out efforts in handling the aftermath.

Hussain A. Al-Qahtani, CEO of S-Oil, made the remarks hours after the blast occurred at its alkylation processing line in Ulsan, about 415 kilometers southwest of Seoul. One subcontractor died, and nine others sustained injuries, mostly severe or minor burns.

“I would like to express my deepest condolences and apologies to the deceased who lost his life from an incident in S-OIL Onsan Refinery and to his family,” Al-Qahtani said in a press conference in Ulsan.

“My apologies also go out to the injured workers and local residents close to the refinery to whom we’ve caused discomfort,” he said.

S-Oil feels the heavy responsibility for the accident and will fully cooperate with related authorities in handling the case and finding the root cause, Al-Qahtani said.

The accident happened at around 8:50 p.m. Thursday during the start-up process after maintenance work, and firefighters completely put out the fire after about 20 hours.

One of the compressors during the start-up is believed to have caused the fire, according to firefighters and the company.

The plant will be shut down until the cause is identified, and preventive measures have been put in place, S-Oil said.

The industry ministry said it will conduct a joint probe with the state-run Korea Gas Safety Corporation and fire authorities to figure out exactly what caused the accident, and launch a safety inspection into all petrochemical complexes in the country.

The government will also set up a task force, along with S-Oil and related agencies, to boost the monitoring of domestic oil supplies, vowing to employ “every means” to ensure stable supplies, such as releasing oil reserves in time.

The company also pledged to explore ways to make sure the accident does not lead to any disruptions in the domestic supply of fuel products, by making full use of inventory and its domestic and overseas networks.

As of early Friday, firefighters had still been working to put out the fire. A total of 26 people were working at the site, including 14 S-Oil employees, at the time.

Alkylation process in petroleum refining refers to a conversion process for producing alkylate, a high-quality gasoline blendstock, by mixing chemical compounds in the cracking unit.

S-Oil posted about 746 billion won (US$589 million) in sales from the Ulsan alkylation unit in 2021, accounting for about 2.7 percent of its overall revenue, according to its latest filing.