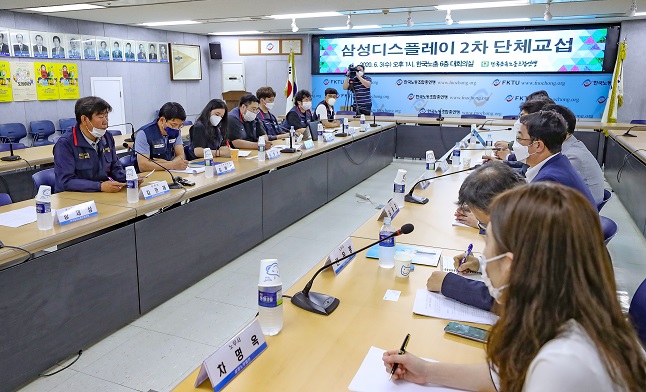 This photo shows delegates from the labor union and management of Samsung Display Co. negotiating a collective agreement on June 3, 2020. (Yonhap)

SEOUL, Jan. 10 (Korea Bizwire) — The management and labor union of Samsung Display Co. said Sunday that they will sign a collective agreement this week for the first time among the electronic affiliates of Samsung Group, which declared it would scrap its “no labor union” policy last year.

A ceremony to sign the agreement will be held at 3 p.m. on Thursday, they said.

The labor union launched in February last year as a member of the Federation of Korean Trade Unions (FKTU), one of the two largest local labor umbrella bodies along with the Korean Confederation of Trade Unions.

The 1,500-strong union has been engaging in negotiations with management to conclude the collective agreement stipulating working conditions since May, when Samsung Electronics Vice Chairman Lee Jae-yong, the de facto leader of South Korea’s top conglomerate Samsung Group, promised to scrap the group’s “no labor union” policy, apologizing over controversies surrounding his succession issues.

After that, unionized workers at Samsung Electronics Co. have also been in talks with management to strike a collective agreement since November.

The final version of the agreement has a provision on exempting union leaders from work, according to sources.

A union official said that although the agreement lacks some details, it is meaningful that the management accepted the existence of the labor union.