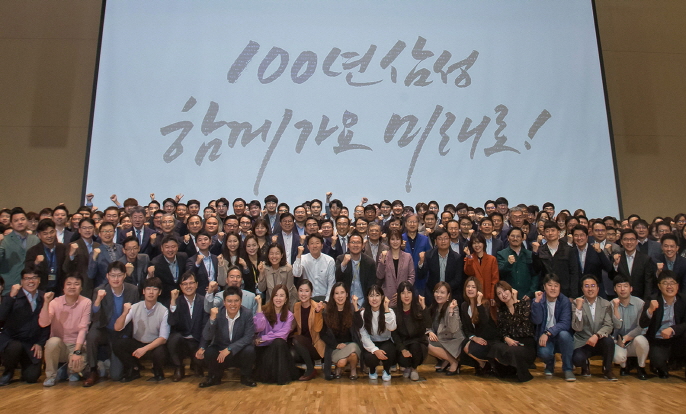 SEOUL, Nov. 1 (Korea Bizwire) — It is never easy to start a new business and manage to survive for several decades, especially in a technology industry that changes at dizzying speed.

Samsung Electronics Co. gets much credit for starting as a small electronics company amid the ashes of the 1950-53 Korean War and expanding to become South Korea’s largest conglomerate and a globally recognized brand.

Established in 1969 as a maker of electrical parts by Lee Byung-chull, who later founded Samsung Group, Samsung is now celebrating its 50th anniversary.

So this would seem a good time to declare a grand vision of becoming a centennial company, but there was little fanfare at the company.

Company executives, including Kim Ki-nam, vice Chairman & CEO of the device solutions division, and over 400 employees celebrated the milestone anniversary at an event at its headquarters in Suwon, south of Seoul.

Vice Chairman Lee Jae-yong, the de facto leader of the company, didn’t attend the event, instead sending a video message to Samsung employees to call for their support to become a centennial company.

Lee was visiting Japan to discuss business issues with partners there, according to company officials.

“The past 50 years were only possible thanks to the dedication and hard work of each and every one of you,” Lee said. “Looking to the next 50 years, let’s free our imaginations and dream of an extraordinary future.”

“By sharing and growing together we will become the very best in the world,” Lee said.

The rather quiet anniversary came at a sensitive time for Samsung and its leadership. It has undergone a tough time at home and abroad amid uncertainties in global trade, as well as legal issues surrounding Lee.

After posting record-high earnings in 2017 and 2018 on the back of the memory chip boom, Samsung saw sluggish earnings this year due to weak chip prices and demand, aggravated by a protracted trade war between the United States and China.

Japan’s imposition of tougher regulations on the export of high-tech materials to South Korea complicated its supply chain and business outlook.

In late August, South Korea’s top court ordered a review of a suspended sentence for Lee in a bribery case that led to the ouster of former President Park Geun-hye.

Lee was put behind bars in 2017 after receiving a five-year jail term, but was released in 2018 after an appeals court halved his original sentence, which was suspended for four years.

With an appeals court currently reviewing his case, Lee attended a court hearing on Oct. 25 to answer bribery charges that could potentially send the billionaire back to jail. 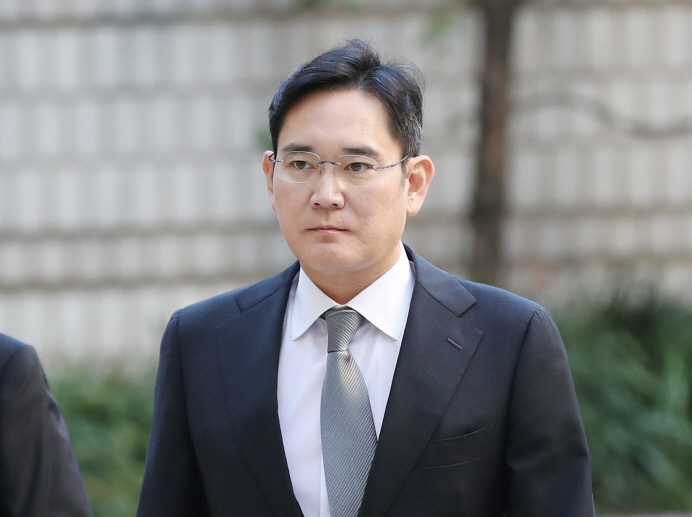 Lee Jae-yong, Samsung Electronics vice chairman and heir of South Korea’s largest conglomerate, heads to the Seoul High Court on Oct. 25, 2019, to attend the first retrial of a bribery case linked to former President Park Geun-hye and her confidante. (Yonhap)

Though the son of hospitalized Samsung Group Chairman Lee Kun-hee controls only a fraction of the shares at arguably the most important company in Corporate Korea, the owner family has played a critical role in shaping Samsung’s corporate vision and approves major strategic decisions.

“While a global company like Samsung has professional CEOs to run the day-to-day operations, Lee’s absence could hamper Samsung’s setting of a long-term vision and decisions on big deals for future technologies,” a senior Samsung official said, asking not to be named.

Samsung is the world’s largest memory chip and smartphone maker and holds the top spot in other tech areas, including TVs and home appliances.

As part of efforts to maintain its market leadership, Samsung has announced investment plans for its semiconductor and display manufacturing and vowed to step up innovation in new technologies, including 5G and artificial intelligence (AI).

Earlier this month, it vowed to spend $11 billion on next-generation Quantum Dot displays by 2025 to respond to the supply glut of large LCD screen by Chinese manufacturers.

To reinvigorate the stagnant smartphone market amid a lack of serious innovation, Samsung launched its first foldable phone, the Galaxy Fold, in September, receiving positive responses in the early stage of its commercialization.

It vowed to expand the foldable lineup and unveiled a clam-shell like foldable device earlier this week.

In the face of a trade war with U.S., China has bolstered efforts to develop its own semiconductor industry to catch up with Samsung and U.S. chipmakers while massively investing in AI and 5G to open up new business opportunities.

Samsung has also faced growing calls to improve its corporate governance and transparency to dispel the association with corruption cases and reduce risks related to the owner family.

During his first retrial hearing, Judge Jung Joon-young at the Seoul High demanded Lee carry out comprehensive reform to improve corporate governance as “the head of a company representing (South Korea).”

Jung reminded Lee of his father’s famous Frankfurt Declaration of 1993, which stressed bold innovation to become an industry leader.

Lee Kun-hee, then 51, told employees at the time, “We are at a crossroad of dying or surviving. Change everything except wives and children.”

“I want you to think about what declaration to make as the head of Samsung Group at the age of 51,” the judge said, before wrapping up the hearing.