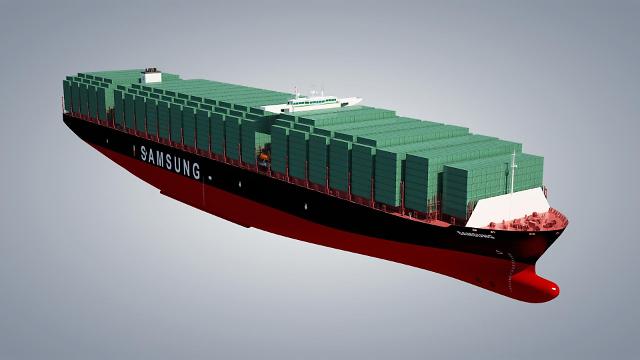 The company is planning to equip four ships with in-house developed propellers and various energy saving installations such as rudder bulb systems and stators.(image:Samsung Heavy Industries)

Seoul, Mar. 3 (Korea Bizwire) — Samsung Heavy Industries has won a contract to build the world’s largest container ships from Japan’s MOL (Mitsui O.S.K. Lines) for 609.2 million dollars, said the company on March 2. Samsung Heavy Industries is due to build, by 2017, four 20,000 TEU class container ships whose deck size will equal that of four football fields combined, and are capable of carrying 20,100 containers.

The company is planning to equip four ships with in-house developed propellers and various energy saving installations such as rudder bulb systems and stators. Samsung Heavy Industries has been investing in R&D to develop large container ships, backed by a multitude of trial facilities including the world’s largest towing tank.