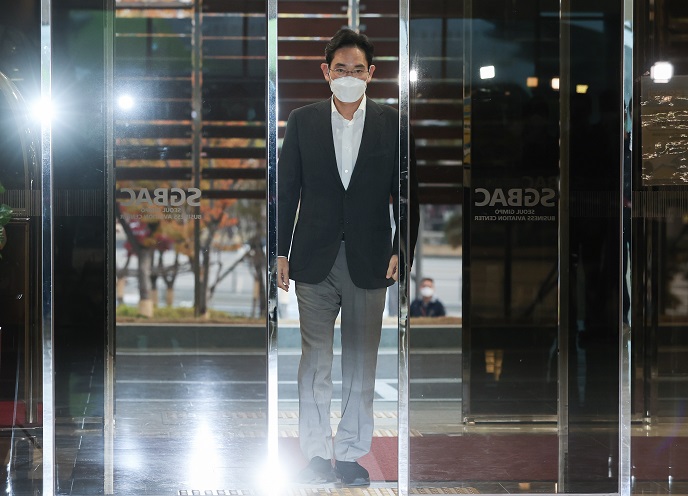 According to industry sources, Lee is scheduled to first visit Samsung’s artificial intelligence (AI) research center in Toronto and then travel to the U.S. to finalize the company’s 20 trillion won (US$17 billion) project to build its new semiconductor plant.

Samsung has been weighing the cities of Taylor and Austin, Texas, for its chip plant site.

Lee is also expected to meet with leading figures in the U.S. semiconductor and information technology sectors as part of efforts to strengthen Samsung’s global network.

He also plans to visit Boston to meet with executives at Moderna, the U.S. pharmaceutical company that has partnered with Samsung Biologics Co. to manufacture COVID-19 vaccines in South Korea, to discuss vaccine supply issues.

Before his departure from Seoul Gimpo Business Aviation Center, the vice chairman told reporters that he “plans to meet with various U.S. partners” when asked of his plans related to Samsung’s foundry investment decision.

Lee sidestepped questions on whether he plans to deliver the company’s opinion to U.S. officials in connection to the Department of Commerce’s request that major chipmakers “voluntarily” submit business information to “increase supply chain transparency.”

It marks Lee’s first international trip since his release on parole in August. He was sentenced to 2 1/2 years in prison on Jan. 18 in a retrial of a bribery case involving former President Park Geun-hye.

It also represents Lee’s first U.S. trip in five years and his first international one since visiting Vietnam in October last year.